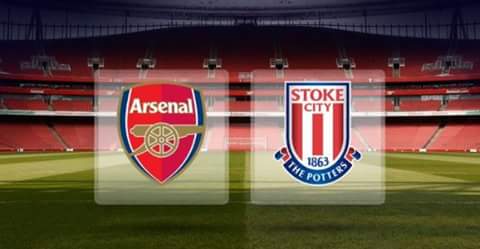 The gunners will be welcoming Stoke City at the Emirates Stadium in a few hours from now as they play their 31st Premier League match for this season.

Arsenal come into this match with an eagerness to win because they would like to end the season on a winning streak because the 2017/18 campaign has not been interesting to the fans due to so many disappointments.

It seems Arsenal’s targets might now be focused on finishing in the fifth position so that they don’t play the play offs of the Europa League of next season if they don’t win it this season.

Stoke City have always been a tough opponent for the North Londoners because it plays defensive type of football that frustrates the gunners and their passing style of play. The potters will come into this match knowing that they absolutely need a win today if they would like to save themselves from the relegation zone.

It will however be embarrassing for the gunners to lose to Stoke City today because it’s isn’t right for a 6th club to lose at a bottom table club that is even in the relegation zone. The gunners have always lost on national celebrations like Christmas day and New Day but the fans will be hoping for something different today at the Emirates Stadium.