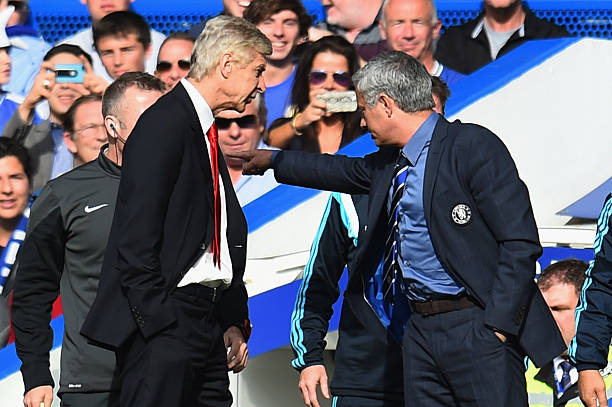 ( Arsene Wenger and Jose Mourinho in a wrangle / Getty)

Arsene Wenger announced that he will step down as Arsenal manager at the end of this season. The manager has since received a lot of tributes from top football legends, managers, players and analysts.

Wenger has been an arch rival of Manchester United manager Jose Mourinho after they have had many word fights in the past and Jose once labeled the Arsenal manager was a specialist in failure because he has failed to win the Premier League since 2004.

Arsene Wenger was asked if he believes he will be friends with Mourinho since he is going to resign at the end this season;

“Will we be friends? It depends. I respect him a lot of course. You should give me a little peace for my final weeks, don’t push me into a final confrontation.” Wenger is quoted by Mirror.

Arsene Wenger is still quiet on what plans he has for the future because there are many speculations that the French manager is still interested in managing football clubs instead of retiring from football.

Most Arsenal supporters wish that the manager retires from football at the end of the season and join the management of the gunners since he is already a share holder at the Emirates Stadium.