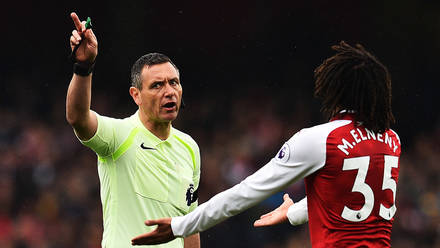 Arsenal midfielder Mohammed Elneny was dramatically sent off in the match against Southampton as the game was about to end, some fans despised that decision by the refree.

The Football Association has admitted that the gunners midfielder was wrongly sent off and say that the Egyptian international is eligible to play Arsenal’s next three matches because the red card has been cancelled.

A statement from the FA read;

“Mohammed Elneny will be available for Arsenal’s next three games after an Independent Regulatory Commission accepted that he was wrongly dismissed for violent conduct against Southampton, April 8, 2018.”

The gunners will be happy with the decision by the Football Association to cancel the red card of Elneny because they wouldn’t wish to finish off the remaining season without some of their stars because they still have some important matches ahead which need every player.

Mohammed Elneny will be happy that he won’t be on the sidelines for the up coming three matches because he could have felt guilty of making un necessary mistake in the Southampton match which could have costed them the three points.

Wenger Reveals Whether He Will Sign More Strikers In Summer