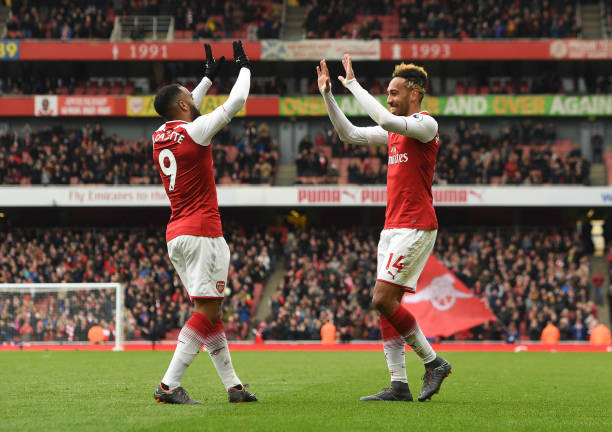 The gunners have got Alexandre Lacazette and Aubameyang in their books and both are astonishing strikers who are both good in their style of playing so the manager currently has a big challenge of choosing who to start matches.

Lacazette returned from the sidelines one week ago and the French man was given his first start since he got a knee injury, the striker was the main forward for the Arsenal team on Friday and the player was very impressive in that match as he netted twice in that match with one of those goals being a penalty goal.

The gooners have been urging the manager to be starting both the strikers in the Premier League but it seems the player isn’t interested but Lacazette has revealed how they can play together with Aubameyang;

“Auba is a nice guy, I think can be good together. After first penalty against Stoke, he told me ‘ If there’s another one, I will give you the ball’ so it was nice from him.” said Lacazette.

“I think we can play together like Sunday but the coach will decide and we will need to respect the decision. I like how Pierre plays and I think we can be good together.”

The statement shows how Lacazette pleads the manager to start him and his friend Aubameyang on Sunday together because he believes that they could even of more value to the club if they were to start matches together.

Arsene Wenger is a manager who usually doesn’t like using two strikers in the same lineup because it would need him to change his formation but this time it’s pretty hard to be benching one forward because they are both nice and he spent a lot of money on bringing them to the Emirates Stadium.

PICTURES: The Arsenal Team Trains Ahead Of Southampton Match