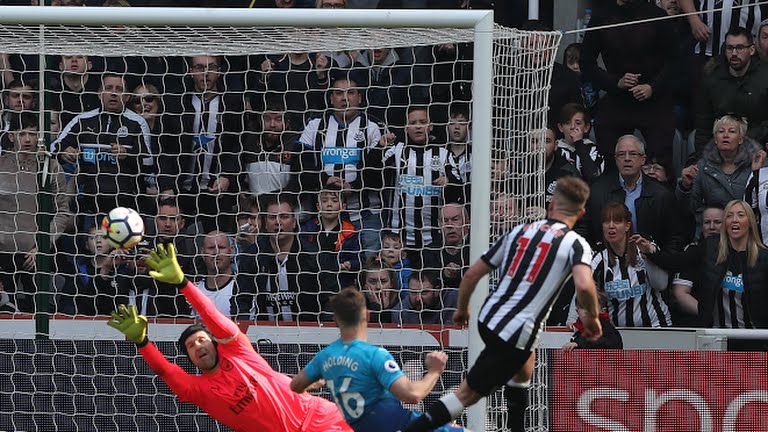 Arsenal were welcomed at the St James Park stadium and were the first to open the scoring but the home side over turned the match to win the match 2-1.

The gunners came into this match when they were over confident because they had won their previous 6 matches and were hoping to do the same today when they paid a visit to Newcastle United‘s home. The home side seemed to have been outplayed by Arsenal in the first 25 minutes but regained their confidence when they equalised in the 29th minute after Alexandre Lacazette had put the ball into the back of the net in the 14th minute.

The first half ended 1-1 with both clubs level and when the 2nd half had just begun, the gunners still had more possession than the home side but were caught a sleep in the 68th minute when Ritchie netted for Newcastle United to take them into the lead. Arsenal were now on a mission to get a goal in order to get a point in this match but they weren’t able to get past the defense of the Magpies who were much eager to fight to keep their lead, the gunners weren’t able to score despite having 72% of the possesion.

Today was the first time Arsene Wenger tried playing both his strikers together at the same time but it can now be concluded that the test has failed miserably, this will be disappointing for the fans because they believed that Arsenal could be un beatable if both Lacazette and Aubameyang start today match but it seems it wasn’t their day.

This loss won’t affect the position of Arsenal but this means that their hopes of finishing in the fifth position have failed and they will now have to keep a keen eye at their back because Burnley are just 2 points away from removing the gunners in the 6th position.