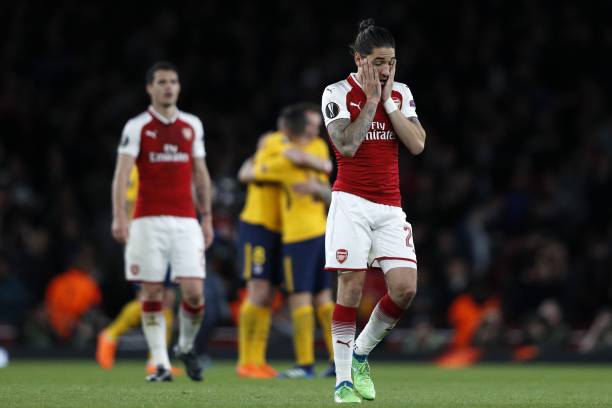 The gunners played the first leg of the Europa League semi finals against their opponents Atletico Madrid last night and the match ended 1-1 after a late equaliser from Antonio Griezmann.

This match ended poorly for the gunners statistically because the Spanish giants have an away goal which puts the North Londoners in an awkward position because they will need to score in Spain next week if they were to qualify for the finals.

Arsene Wenger was neither happy nor disappointed with the result obtained at the Emirates stadium against a 10 man Atletico Madrid but the manager believes that they will have a lot of work to do away.

“The only advantage of that result is we know exactly what we have to do over there. We have nothing to lose, we have to go there and really play to win.” Wenger told arsenal.com.

Arsenal are playing in the UEFA Europa league for the first time after 19 years absence from the competition and their goal is to win it this season so that they could quietly go back to the UEFA Champions League for next season and even giving Arsene Wenger a beautiful farewell.

It is said that the gunners are also interested in appointing Atletico Madrid manager Diego Simeone as their manager but he might not accept to manage a club which isn’t in the UEFA Champions League.

Wenger Reveals Whether He Will Be Friends With Mourinho