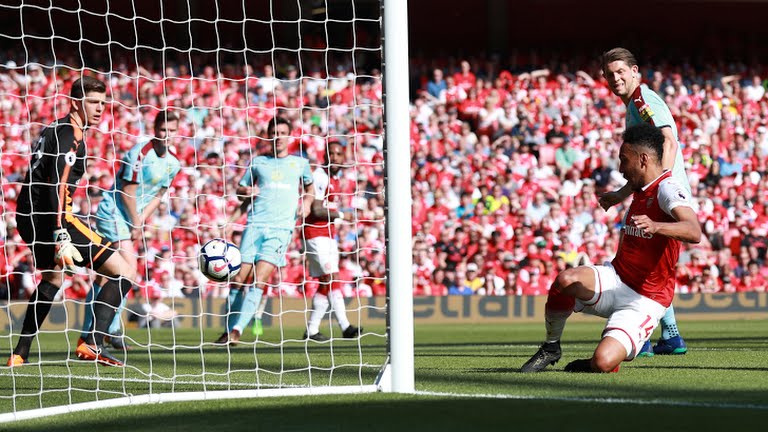 Arsenal welcomed Burnley at the Emirates Stadium today and they have thrashed the Clarets 5 nil due to a fantastic performance from the North Londoners with goals from Aubameyang (2), Alexandre Lacazette, Sead Kolasinac and Alex Iwobi.

The gunners came into this match with two goals with one being, trying to make their supporters forget about their disappointing elimination from the Uefa Europa League on Thursday after Atletico Madrid beat them 1-0, the Arsenal squad also wanted to make Arsene Wenger’s last home match as gunners boss a special one and they indeed have succeeded as they have shown a remarkable performance against Burnley.

The gunners started the match impressively as they dominated in the first 5 minutes, keeping all the possession to themselves and finally got their first goal through Pierre Aubameyang who scored in the 14th minute thanks to an assist from Alexandre Lacazette. The gunners then pressured the Clarets through the entire remaining minutes in the first half and the visiting side finally gave in as the gunners doubled their lead through Alexandre Lacazette a few seconds before the referee blew the whistle for halftime.

The Arsenal team was even more fierce in the second half as they dominated possession again and made many chances with some going into the net with left back Sead Kolasinac scoring too in the 54th minute, and Alex Iwobi also scored just after 10 minutes later.

It seems it was Pierre-Emerick Aubameyang’s day as he scored the fifth goal to make it a double for the day, the Arsenal supporters in the stadium all looked happy because this is the performance they have cried for all season.

Arsene Wenger will also be happy with the performance today because he at least saw smiles of the supporters this season and he has continually been saying that he also becomes sad doesn’t do as expected like Thursday’s loss against Atletico Madrid which hurt all the Arsenal supporters worldwide.

Arsenal are still in the 6th place even though they have won today with many goals but are at least keeping their position safe from the Clarets.

Arsenal Gets Eliminated From The Europa League By Atletico Madrid