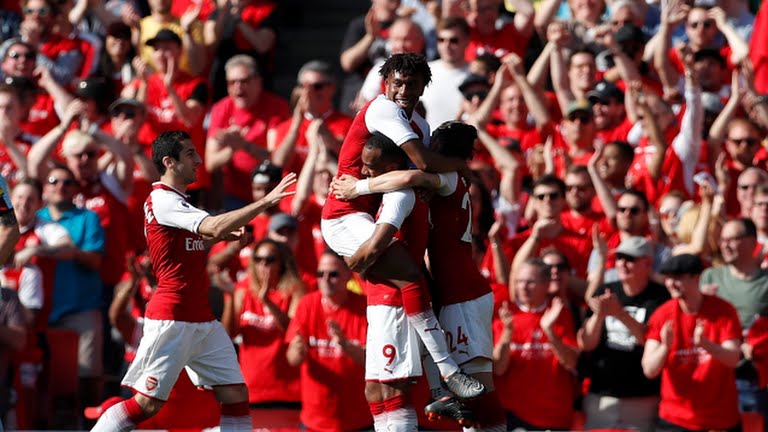 Arsenal are playing against Burnley today at the Emirates Stadium and the referee just blew the whistle for halftime and the gunners are leading by two goals thanks to Aubameyang and Lacazette.

Arsenal have controlled this match well because they have had most of the possession throughout the 45 minutes and don’t want to make any mistake which could make them drop the precious three points.

Arsene Wenger came with a strong squad because he has nothing to lose since they have been kicked out from the UEFA Europa League which had the manager to be resting players.

The gunners scored in the 14th minute through their striker Aubameyang who put the ball into the back of the net and have had some more chances which they have failed to capitalize on. The players will be looking to give Wenger a perfect send off so what’s a better last home match with a comfortable win.

Aubameyang’s goal was assisted by Lacazette which has made the home fans happy because they see this as a great sign that they could form a phenomenal combination next season.

Alexandre Lacazette doubled the Arsenal lead in the last minutes of the first half thanks to an assist from Hector Bellerin.

Burnley will need to regroup if they would like to get back into the match because their win probability is very low right now per their current performance in the first half but it’s been a great 45 minutes for the gunners.

Overview: Why Arsenal Should Sign Lucas Torreira This Summer