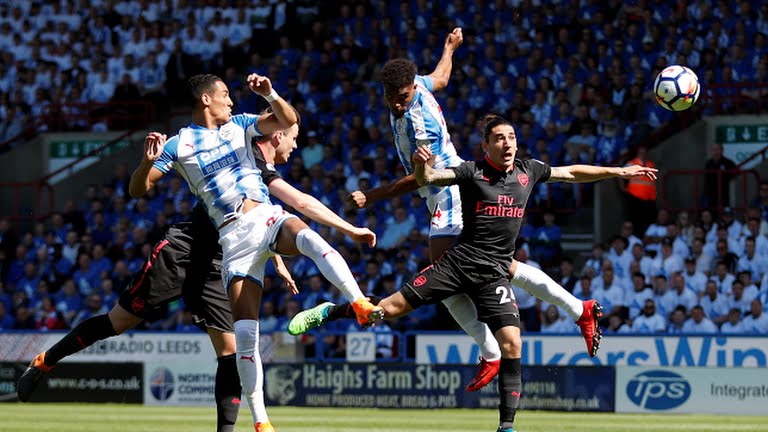 The Arsenal team has won their last match of the season today against Huddersfield Town after a tremendous last performance of the 2017/18 campaign with one goal from Aubameyang to gift the North Londoners the three points.

The gunners came into this match hoping to get a win to get a win for their departing manager, Arsene Wenger who announced a few weeks ago that he leaves at the end of the season so this was his last match as a manager of Arsenal Football Club. The players made him proud today as they won today’s match against Huddersfield 1-0.

Arsene Wenger was shown respect by the supporters of both sides in the 23rd minute of the match as they applauded the Frenchman for the work he has done in the Premier League and he also stood up to show that his greatful to them.

The Arsenal team dominated the match through out the 45 minutes of the match and even scored in the 38th minute through their henchman Aubameyang who continued his splendid form as he has now proved that he will be a goal scoring machine next season, the first half ended 0-1 in favour of the gunners.

The second half started off well as in the first half as they made some decent chances which however didn’t go into the back of the net. It was a bit intense for the gunners because Huddersfield Town was heavily pushing for an equalizer so that they can get something from the match but they weren’t able to get past the Arsenal defense who looked determined to pull off a win today.

– Arsenal players were committed to winning this match for Arsene Wenger.

– Supporters of both teams all showed to respect to Wenger by applauding him in the first half.

– Wenger has ended his last match as Arsenal boss with a win against Huddersfield Town.

– This match marks Wenger’s last match as a manager of Arsenal football club.

This was a special match for the North Londoners and their supporters because it marks an end to their longest-serving manager’s career with them.