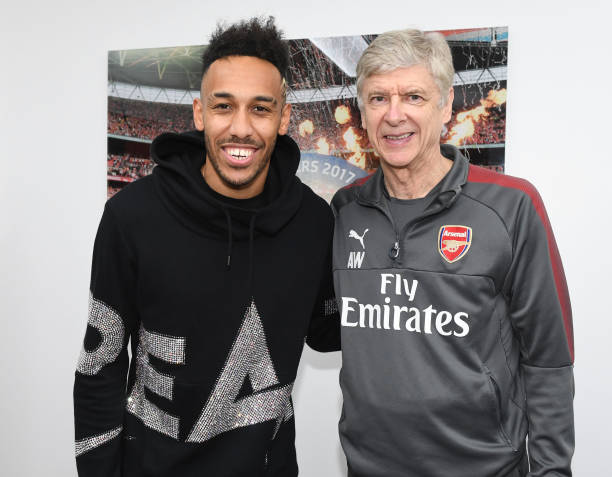 Arsene Wenger left the Emirates Stadium at the end of the 2017/18 season after continuous protests from the Arsenal fans who felt it was time for the Frenchman to leave the club because things were falling out of hand in his reign at the North London club.

Aubameyang was the last player which Arsene Wenger signed before he left the club and the striker has become one of the most loved players at the Emirates Stadium, the Gabonian international says that the club got stagnated a bit in the time which their former manager was running it and the supporters will agree with him because they were against the board’s decision to give Wenger a new deal last year.

Aubameyang however says that it’s a bit strange for the fans that Wenger has left the club un expectedly;

“On one hand, it’s strange for all the fans that the coach has left. But it’s definitely a fresh start.” Aubameyang is quoted by Metro Sport.

“Since over the last few seasons, you have to tell the truth, the club has stagnated a little bit. I think everyone is actually a bit excited to see what happens next season.”

The Arsenal team has failed to win the Premier League since 2004 and their fans believe that the person to blame for this is the now gone manager Arsene Wenger who was always adamant to sign World Class players which could lead the club to glory, it was just recent that the North Londoners have been able to have big name stars like Mesut Ozil, Alexandre Lacazette and Aubameyang in their team but time was up for the manager so he will hope new manager Unai Emery fulfils his dreams since he has left.

Aubameyang is optimistic about the up coming season and he has already said that he believes that his club will be among the title contenders next season which starts in August.