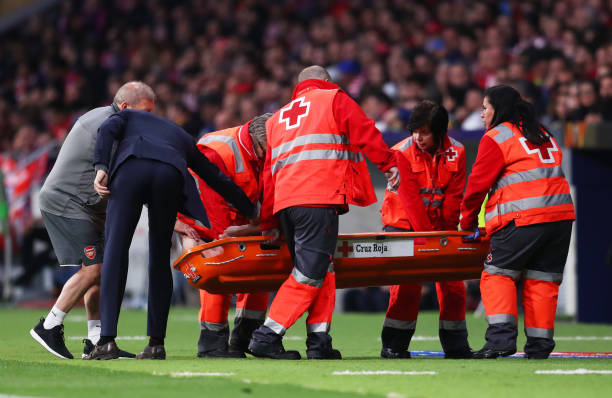 ( Koscielny being stretched off / Getty )

Arsenal defender Laurent Koscielny was taken out from the pitch last night after the gunners were hosted at the Wanda Metropolitano stadium by Atletico Madrid.

The defender got injured in the first minutes of the match and was then subbed off in the 12th minute because he was unable to continue playing, most Arsenal supporters believe that they could have not conceded if the Frenchman and captain of the night had stayed in the match because he was the most experienced defender for Arsenal on the pitch last night.

Arsene Wenger was asked about the current status of the injury of the French defender and he said that it doesn’t look good;

“It doesn’t look very good, his Achilles is. You can always hope for a miracle in the scan that he will have but the first signs don’t look good.” Wenger told Arsenal.com.

The manager was asked whether the Frenchman will be able to make it to the World Cup which commences this year and he said that he isn’t sure for now.

Bad News For Gunners As Koscielny Out For Six Months