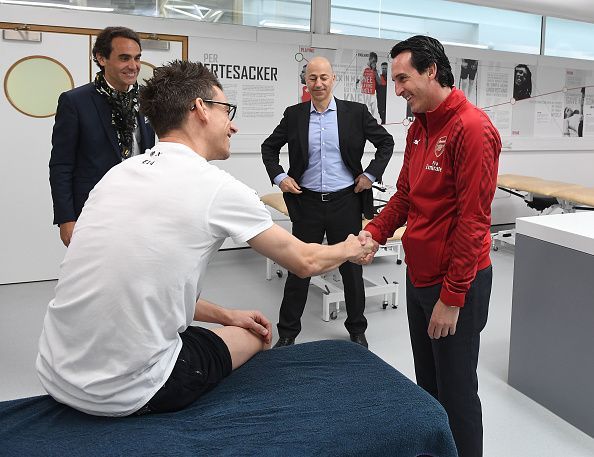 The 2018/19 season will be starting next month and Unai Emery will need to fix all loopholes in his squad before it starts, and those include choosing a captain who will be the leader in the squad.

Per Mertesacker was Arsenal’s captain last season but the German international retired at the end of last season and unfortunately his vice, Laurent Koscielny also sustained an injury which has kept him out until December adding more pressure on Unai Emery on who to choose as leader for the up coming season.

Unai Emery was asked about a number of issues yesterday at the London Coloney and he said that he hopes to have five captains at the North London club in the 2018/19 season.

“We’ve spoken about that. My idea is to know every player and to know, also, the personality of the players. And then, I think my first idea is to have five captains in the team.” said Unai Emery.

Unai Emery acknowledged that Laurent Koscielny is the first captain now and he says that he will respect that when he decides to choose a captain in the future, he however said that he is waiting to see a player who has a good personality in the Arsenal dressing room.

“We want to keep the respect for these players and to find the captain and choose very well the best player for that.”

Unai Emery Reveals What He Told Wilshere Before The Midfielder Left