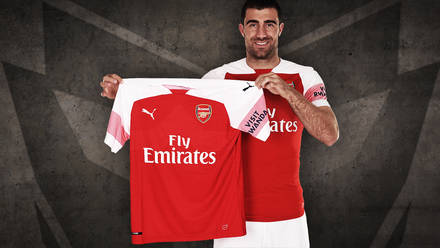 Arsenal have confirmed the signing of Sokratis Papastathopoulos from Borussia Dortmund today and the Greek international comes to the Emirates Stadium at a time they needed a new defender at the club.

It is no doubt that the North Londoners has got tired of waiting for the official announcement of Sokratis Papastathopoulos because they rumours linking him to the Emirates Stadium started way back when Unai Emery had just been appointed.

Sokratis Papastathopoulos understands that his name “Papastathopoulos” is very tough to pronounce but he has made it simple for the Arsenal fans as he has told them to be using “Papa” instead of his lengthy name of “Papastathopoulos”. He said this in a video which Arsenal posted on its official Twitter account.

The Arsenal supporters were cool with the short form of his name and their replies on that tweet said that they liked the “papa” name because it was going to be hectic for them to pronounce Papastathopoulos because it’s a lengthy name.

Related Topics:ArsenalSokratis Papastathopoulos
Up Next

Video: Watch The Behind The Scenes In Unai Emery’s First Training