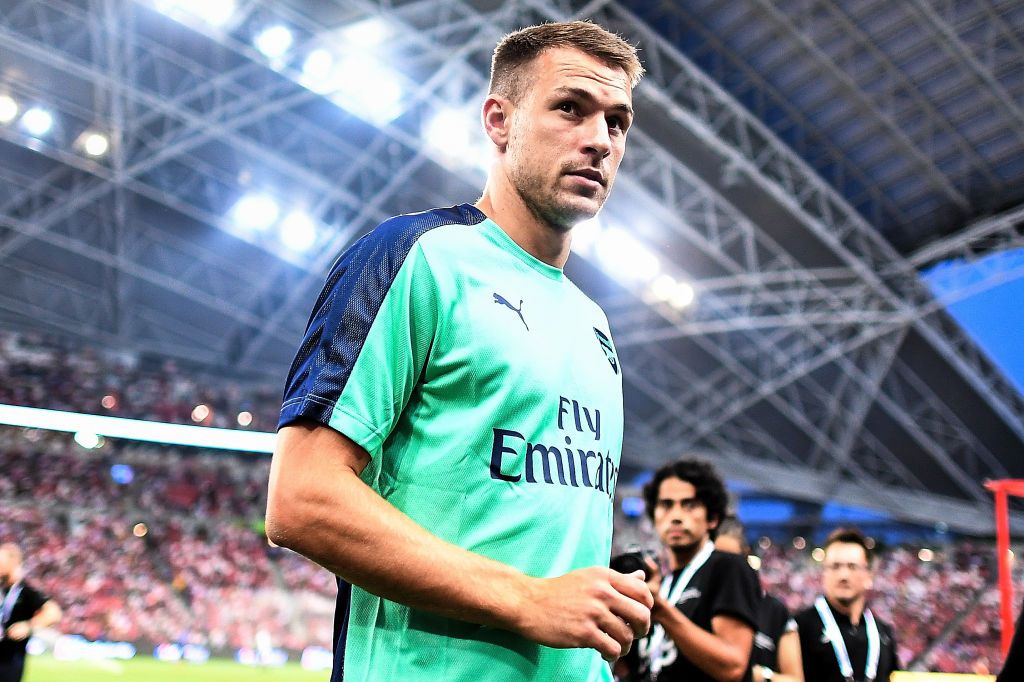 Arsenal’s manager, Unai Emery has reiterated over the course of the pre-season of having five captains in his team.Why he came to that thought is another kettle of fish entirely but judging from the team’s lack of leaders on and off the pitch you may as well understand where he is coming from.

Most of the club’s ex-players have all given their thoughts on this issue of having real leaders in the locker room, some have suggested that the club’s main problem is lack of character which has always been a “clog in their wheel” for success so it’s for this reasons and more perhaps that Unai Emery is poised for a quintet of skippers in his team.One of such players considered in this quintet is the almost infallible,Aaron Ramsey.

Ramsey is currently locked in a contract saga with the club.He has 12 months remaining on his current contract and the club is faced with the decision to either sell him or let him go for nothing at the end of his contract.

I won’t be dwelling much on his contract situation at Arsenal but his leadership mien or ability if we are to put that in the right context.
The question really is, does Aaron Ramsey have the much talked about “cojones” (my special thanks goes to the fat dude at Watford for that word) to be a captain that Arsenal have been craving for since the departure of Patrick Vieira or “Mr Arsenal”, Tony Adams?

On the 26th of March,2011 Aaron Ramsey was made ”permanent’ captain of the Wales national football team by the then Wales Manager, Late Gary Speed at the age of 20 years and 90 days eclipsing the previous record held by Mike England against England.

There were other great players in the team at that time but Gary Speed opted to make him (Ramsey) captain.Gary must have seen some leadership traits in him that Chris Coleman didn’t acknowledge as he stripped Ramsey of his captainship.

Paul Marriner spoke of Ramsey’s leadership abilities recently as he told ESPN, “Ramsey should be the man to head that contingent”! (of five skippers in the team).

“The best teams,the teams that win all the big trophies, have a certain amount where there are four or five who could have a hand on but do the job anyway.”

But for a team like Arsenal,I think that’s the one thing they have sorely missed over the last decade.You ask all the big players that played for Arsenal when they went that season unbeaten, each one of them would turn around and say,Patrick Vieira.I believe Aaron Ramsey has that effect at Arsenal.

Liverpool legend,Steve Nicol also had a thing or two to say about the Welsh box to box midfielder.

“As far as trusts is concerned he makes the difference”. He also continued by saying,”You need people who are on the field when things aren’t quite going the way they’re supposed to that work it out and make a difference.”

There’s no doubt about Ramsey’s playing abilities but injuries are his “Achilles heel”.He covers a lot of ground on the pitch.He is probably the most hardworking player on the field.

Wenger described him as a player with a “fantastic engine a wonderful technique and good vision” He also called him an “offensive Roy Keane”.
Ramsey’s work ethics is superb and somewhat incredible.Arsenal needs that “X Factor” and Ramsey ticks all the right boxes.Ramsey’s goals and assists has always nicked it for Arsenal when the going gets tough.Look at the FA Cup triumphs against Hull City and Chelsea to mention but a few.

Let’s remember that Ramsey is the longest serving player in the Arsenal first team set-up.While that might be a criteria, it should be noted that his team mates rate him highly.Henrikh Mkhyitaryan,Aubameyang and Petr Cech all spoke of his importance to the team.That tells us something about his personality as a player and professionalism.

While it remains to be seen if he would remain with the club beyond this summer as it’s just one day to the end of the transfer window (for incomings to the The Premier League).

I hope that he’ll pen that contract and continue to flourish in the famous red and white colours of the Gunners.

So that’s it from me.Please do have a wonderful day ahead.

READ: The Ivan Gazidis Show As Rumours Link Him To AC Milan