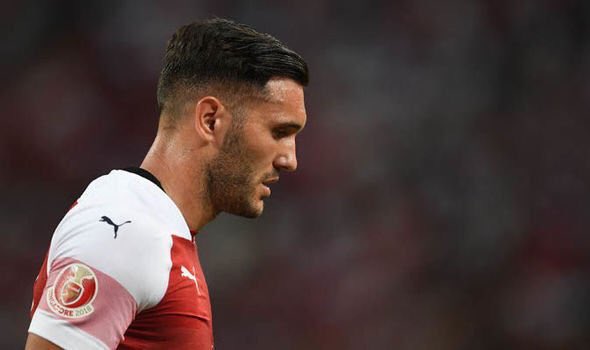 Arsenal striker Lucas Perez was loaned to Deportivo last season after he failed to impress for the North Londoners in his first season at the Emirates Stadium, the forward recently returned to the club this summer but he will likely be leaving permanently according to reports.

It is however been reported by Portuguese newspaper A Bola that Arsenal’s manager Unai Emery has agreed to let go of the Spanish international because he is surplus to the requirements at the North London club.

The report says that Sporting Lisbon is interested in the striker and that the gunners are ready to accept a payment of just £4.4million yet they paid a lot more than that to bring him to the Emirates Stadium two years ago.

There were reports that Unai Emery was going to revive the form of Lucas Perez at Arsenal by giving him another chance in this upcoming season but the striker has failed to make an impact in the pre-season matches so the manager might have changed his mind.

Unai Emery has also shown that he favours starting either Pierre-Emerick Aubameyang or Alexandre Lacazette in his lineups in the four pre-season matches which the gunners have so far played so Lucas Perez might literally be leaving the gunners in this transfer window.

Sporting Lisbon will however need to act fast if they are to sign Lucas Perez in this transfer window because it will soon be closing but it is said that the striker will need a contract worth £6.2million a year  to join the Portuguese club.