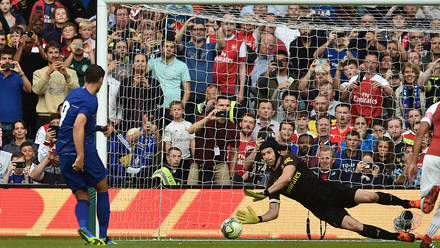 Arsenal played against Chelsea on Wednesday night in Dublin and Petr Cech played the full 90 minutes of the match as they beat his former club on penalties with the Czech Republican international saving one of them in the penalty shootouts.

The gunners were the first concede in their final International Champions Cup match and the blues were later awarded a penalty which Petr Cech saved, surprising the Arsenal supporters who used to criticize him saying that he has never saved a single penalty in the three years he has spent at the Emirates Stadium.

The gunners equalised in the last minutes of the match and the match went to penalties and Petr Cech saved one which helped them win the match against Chelsea and the Czech Republican international was very excited on saving those penalties as he revealed how he felt at saving the two penalty kicks.

“I felt confident. We’ve been working really hard and really well, so when you are prepared you feel confident obviously.” Petr Cech told Arsenal’s official website.

“The game didn’t start well for us when we went 1-0 down, but eventually we improved and in the end from both sides it was a really entertaining and quality game.”

Petr Cech also thanked the players that scored for Arsenal in the penalty shootouts and the goalkeeper will certainly be happy with Unai Emery for giving him the chance to be in-goal in last night’s match because they are rumours that the new Arsenal manager doesn’t trust the veteran goalkeeper.

Arsenal signed Bernd Leno this summer and the Arsenal supporters are hoping to see an improvement in Petr Cech because it will be the first time the former Chelsea goalkeeper finally gets a big competitor in the squad.

Lucas Torreira Reveals Funny Reason Why He Took The Shirt No.11