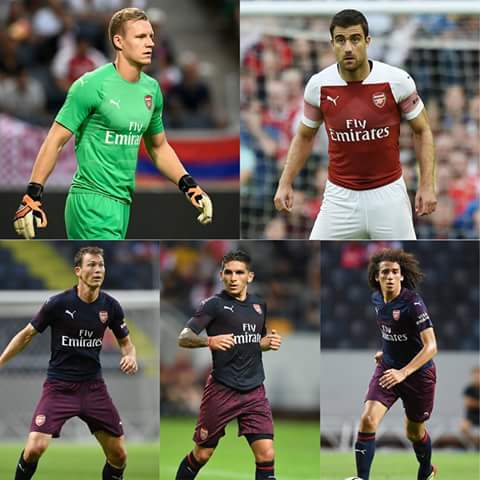 The transfer window is finally over after two months and it’s been a busy one for Arsenal as a club because it has welcomed a new manager and five players so let’s take a look at all the new faces at the Emirates Stadium.

The Spanish international was appointed as Arsenal’s new manager in May after the departure of Arsene Wenger who had spent over 20 years at the North London club, his move to the Emirates Stadium was very controversial as no one expected him to get the job because most rumours said that Mikel Arteta would be chosen instead.

The new manager has made some changes at the club, changing the way players train, new tactics on the pitch as well as banning use of Mobile Phones during lunch breaks and many other things.

The veteran defender became Unai Emery’s first signing, making a move from Juventus to Arsenal on a free transfer is a move which some Arsenal supporters didn’t like because the player is old but his performance at the World Cup has changed their minds as he has shown how he can strengthen the defence of the gunners.

Arsenal supporters now can’t wait to see him in action this season and hope that he will give Hector Bellerin significant competition because the young Spanish international has been reluctant over the last two years.

The goalkeeper also joined the gunners in this transfer window becoming Arsenal’s second signing and his arrival was welcomed by most Arsenal fans because they had always called on their manager to sign a new young goalkeeper and Unai Emery honoured their wish and got them one.

Bernd Leno will be hoping to beat Petr Cech to becoming the manager’s first choice goalkeeper but it won’t be easy since the Czech Republican international has also said that he will fight for his position at the club.

The defender arrives at the Emirates Stadium to end their defensive woes and the gunners will be hoping that he gets used to the Premier League quickly because it’s tougher than the other leagues.

What Arsenal fans have liked about him so far is that he is a no-nonsense defender who is very strong and always looks serious in training as well as on the pitch, they are however afraid that he might get many red cards this season due to his playing style.

The former Sampdoria midfielder is considered to be Arsenal’s best summer signing according to how the Arsenal supporters waited for the official announcement of Lucas Torreira’s move to the Emirates Stadium. The gunners were linked with the midfielder for a long time and he finally signed for the North Londoners last month, becoming Unai Emery’s fourth signing of the summer.

Arsenal fans were happy with his performance in the FIFA World Cup especially when Uruguay faced Portugal and the midfielder marked Juventus star Cristiano Ronaldo well until the match ended.

The young Frenchman became Arsenal’s last signing of the summer after arriving from Lorient and he has been impressive in the pre-season among all the five players which Unai Emery signed this summer.

Arsenal fans have had debates on social networks on whether Matteo Guendouzi deserves a start against Manchester City with most supporting that idea while some say he impressed in pre-season matches because they are less competitive.

So that’s, it all the five signings which Arsenal’s new manager Unai Emery made in this summer transfer window.

Exclusive: Unai Emery To Start Both Lacazette And Aubameyang Against West Ham