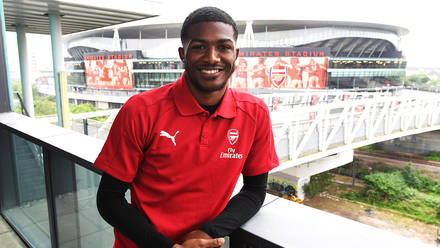 Arsenal will be playing against Manchester City on Sunday and gunners manager Unai Emery is making final preparations ahead of that match since everyone is looking forward to that match because it will be his first competitive match since he took charge of the North London club in May.

Arsenal’s first team left backs aren’t available, Sead Kolasinac is currently injured and Nacho Monreal just returned to training so he isn’t ready for the match against Pep Guardiola’s men and the manager has hint that Ainsley Maitland-Niles could be chosen in that position on Sunday.

“We are working on the possibility to work with Ainsley, who has experience in this [left-back] position. We want to give him confidence.” the manager told Arsenal.com.

“I’m not sure because I am going to decide tomorrow [Saturday] on the first 11, but Ainsley is the player who started the last match against Lazio.”

Arsenal supporters will be hoping that Unai Emery comes with a strong squad against Manchester City because the defending champions are a tough opponent but the gunners may have to cope up with a youngster – Maitland-Niles starting in the left back position on Sunday because the manager doesn’t have many options.

Ainsley Maitland-Niles is a talented central midfielder  who can sometimes play in the left back role and it seems Unai Emery has been testing him in that full back position, it will also be a special moment for Maitland-Niles if he is on the lineup because it will be a perfect opportunity for him to win over the heart of the manager so that he can be in the starting eleven in the other matches.

Unai Emery says that he will decide his starting lineup tomorrow but it’s un clear whether the club will release it right away but it will probably be shown an hour before the match starts on Sunday.

Unai Emery Reveals The Message He Tells His Players