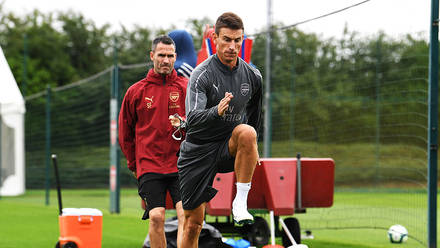 Arsenal defender and captain Laurent Koscielny has returned to the club for rehabilitation, and he will be coming back to training in November according to the medical team of the North Londoners.

The French international sustained a knee injury before the end of the 2017/18 season and it has made him miss the start of the new season, Arsenal fans will be happy to see him back in training because the gunners have been poor in defence in the last two matches against Manchester City and Chelsea.

Arsenal manager Unai Emery decided to name him as the captain of the squad for this season even though he was injured, and he has today given an update on the situation of Laurent Koscielny and says that they need to be patient with the French international.

“We are happy to have him here with us, because he’s our captain and he’s showing us his spirit to stay with us.” Unai Emery told Arsenal.com.

“We need to be patient with him because the injury was an important injury. It’s clear that it’s very important to stay with us, working here and showing us that he wants to help us.”

Unai Emery will be hoping that his defensive problems will be fixed when Laurent Koscielny returns to the pitch in December because his new central defender Sokratis Papastathopoulos has failed to meet up to the expectations of everyone because he is still adapting to the Premier League.

Laurent Koscielny will now be hoping to make a return soon to training by November and then finally start playing again in December.

Mesut Ozil Is Sick And Will Miss West Ham Match