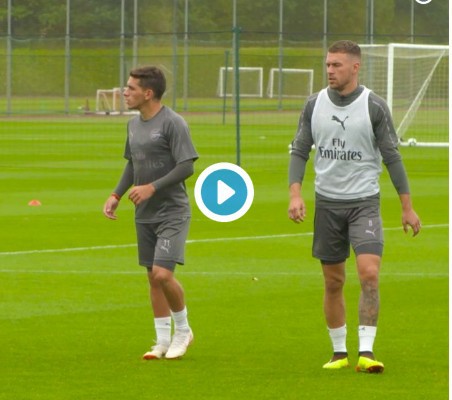 Arsenal kicks off its Premier League campaign on Sunday as they welcome Manchester City at the Emirates Stadium and this will be Unai Emery’s first competitive match since he took charge of the North London club.

The Arsenal squad has continued its training and are saying good-bye to some of their teammates like Lucas Perez who leaves the Emirates Stadium today but preparations are on going as Unai Emery will be hoping that he gets his first win against a top side like Manchester City.

Arsenal posted a video on its official Twitter account as it shows the players busy in training, you can watch the video below.

Getting set for City ?

It seems all of Arsenal’s new signings including Matteo Guendouzi are also training and some could earn a starting spot against Manchester City since the manager said that he will only choose them in the lineup on Sunday if they can show that they are physically and mentally ready.