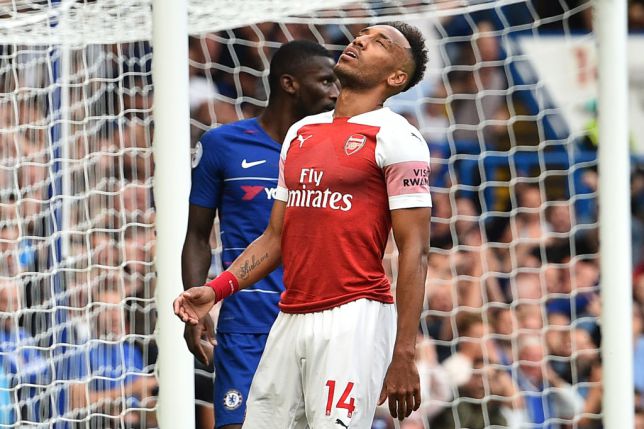 Arsenal’s record £60m signing Pierre-Emerick Aubameyang has had a tough start to the 2018/19 EPL season, his first full season for the London club. He started in Arsenal’s defeats to reigning champions Manchester City and Chelsea, against Chelsea where the Gabonese attacker missed two sitters that left fans and the player himself rather disappointed.

But this is set to change with Arsenal having favorable fixtures ahead against West Ham United,Cardiff City and Newcastle United. He so far has 5 shots at goal, 2 of which are on target.

Aubameyang has also made it clear to manager Unai Emery that he is ready to play on the wing to accommodate Alexandre Lacazette who has come off the bench in both of Arsenal’s matches this season. Stats have shown that when the two strikers play together they tend to assist each other,both getting onto the score sheet, this was seen last season with fans calling the duo “Auba-Laca” due to their connection.

With decent games ahead, Arsenal should be getting their first victories of the season and Aubameyang should be involved either by scoring or assisting and the prospect of him and Lacazette both starting is an exciting thing to look forward to and should yield Arsenal the results they’ve needed.

These fixtures should also be focal point for Mkhitaryan and Ozil to get back to their best especially Ozil who seems to be traumatized by the racist remarks he received. Lucas Torriera should be able to settle down into the lineup and maybe Bernd Leno will get his promised chance to feature.