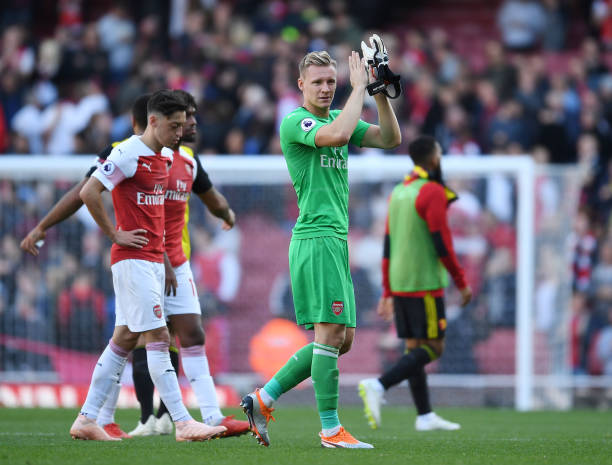 Bernd Leno arrived at the Emirates Stadium in the summer transfer window and the German goalkeeper has played as a back up of Petr Cech ever since this season begun.

Bernd Leno has become a fan favourite at Arsenal in just the few months he has been there because the Arsenal supporters believe that he will succeed in the playing style which Unai Emery wants to introduce at the North London club.

Arsenal fans have urged Unai Emery to use Bernd Leno in the Premier League but the gunners boss has remained adamant that Petr Cech is for now better than the young German goalkeeper, Cech was however replaced by Bernd Leno on Saturday when the gunners took on Watford and he had a great performance, it was also a very special day for him because he tested Premier League football for the first time in his footballing career.

Bernd Leno kept a clean sheet against Watford and the young goalkeeper was very excited to have made an appearance in the Premier league, he also spoke of how he is happy that Arsenal is like a family.

“Of course I didn’t play so many games, but my feeling was very good and I feel like the team is very nice. The club is like a family and I love this, so let’s keep this going on.” Bernd Leno told Arsenal Player.

Bernd Leno will be hoping to impress in the upcoming matches because Petr Cech is going to be out for about two to three weeks according to Unai Emery. So this will be a perfect chance for him to become Unai Emery’s first choice goalkeeper.

Alex Iwobi Reveals How Unai Emery Has Helped Him Improve