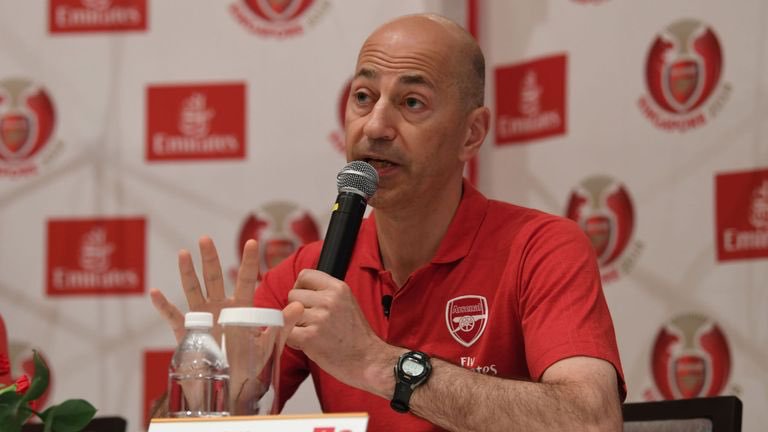 “The proverbial cat is out of the bag” as the news of Ivan Gazidis’s departure from Arsenal to A.C Milan rages on as wild-fire on a harmattan day.

The news of the Greek-South African corporate lackey’s departure to A.C Milan has been on since July, with various news outlets in Italy confirming his move a done deal but Arsenal’s Chairman,Sir Keswick Chip denied such rumor as he said back then:

“Gazidis has never accepted any of these opportunities and has never spoken about them publicly. He has always been fully committed to taking Arsenal forward.”

While Arsenal’s position on the matter then was rather unconvincing and bland it was just a matter of time before the rumor spun out of control and Gazidis helped stoke “the embers of fire” by refusing to say anything until when it was confirmed officially by Arsenal.

So Gazidis leaves Arsenal after ten years of romance with the club.In his stead,the Club has announced the promotion of Raul Sanllehi from head of football relations to head of football and Vinai Venkatesham, currently their chief commercial officer, now their managing director.

The answer is an emphatic no!! As Arsenal was quick to replace him.Some section of Arsenal fans are glad to see the back of Arsenal’s former CEO. He is described as an attention seeking corporate suit who is always wanting to grab the mic and face television cameras at any given time and a failure in terms of commercial deals & on the management of player’s contract.Even with the latest Addidas deal,most people still think Arsenal should be getting a better deal than what the club is getting from Addidas.He was also accused of allowing the club rut under Wenger during the latter’s last years at the club.

On the other hand, he was credited with the signing of Raul Sanhelli,Sven Mislintat,Darren Burgess,Vinai Venkatesham and of course Unai Emery.Perhaps Ivan Gazidis already knew he was leaving since his famous “catalyst for change” speech.He has helped ease Arsenal into a new era but he won’t be part of that change apparently.

Is Gazidis leaving Arsenal for Money?

Most Corporate lackeys are just lackeys.They do it all for the money and nothing else.While it is not a crime to want to leave an employment for money,Gazidis was labelled as an expensive Chief Executive who does not deserve the £2.3 million he earns at the Club.Under the Elliot Sports management owned A.C Milan, he’ll be earning £3.3 million.An extra 1million quid!! Now your guess is as good mine.

At the unveiling of the new appointees,Raul& Vinai had this to say: via Arsenal.com.

Raul said:“Although I joined Arsenal just months ago, I’ve felt embraced by this great club and part of its family from the first day. I will do everything possible to maintain our strong values which will be as fundamental to our future as they have been in our past.”

While Vinai said: “From the day I joined Arsenal I have always considered it a privilege to serve this great football club, so it’s an honour to take up the position of managing director and lead the club alongside Raul.”

“Together we will work tirelessly with the extraordinary staff we have at Arsenal to respect and enhance our unique history, heritage and values; with the overall objective to bring success to our millions of fans all around the world and make them proud of their club.”

“I thank Stan and Josh Kroenke and the rest of the board for their trust in me, and Ivan for all the support he has given me since I joined the club in 2010.”

From all indications it seems that Vinai Venkstesham would replace Gazidis in the board room.In my previous article about Gazidis’ move to A.C Milan weeks back, I mentioned the possibility of Josh Kroenke being Arsenal’s new CEO,and now that possibility is fast becoming a reality.

So there are new faces in the Arsenal boardroom to compliment Stan Kronke’s take over. Arsenal fans will strongly hope this new era would usher in good tidings for Arsenal in terms of competitiveness both domestically & abroad.

How Mesut Ozil Has Changed Over The Years