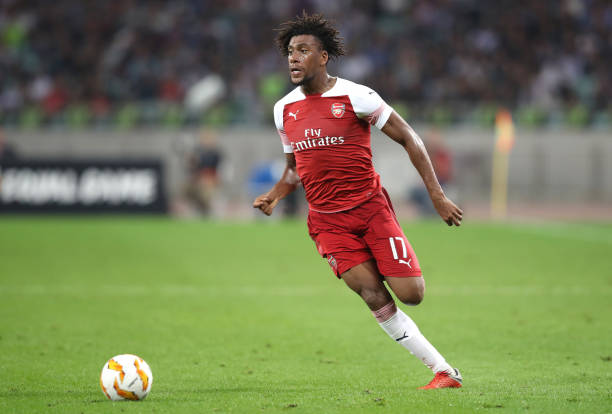 Alex Iwobi broke into the Arsenal first team not too long ago but it was very interesting to see an academy player prove his worth to the then gunners boss Arsene Wenger. The young Nigerian has now become an important team member and has started showing good signs of impressing under Arsenal’s new boss Unai Emery.

Alex Iwobi was used in the first Premier League matches of Arsenal this season but was later dropped from the starting eleven after Unai Emery decided to use different players as he looked for his perfect first eleven. Iwobi has understood that he will have to work hard to earn a place in Unai Emery’s first eleven but he is however on a tough mission because he has to show the boss that he can have a better performance than Aaron Ramsey.

Alex Iwobi has been impressive in Arsenal’s recent previous matches including the one just played in Azerbaijan, the midfielder bossed the midfield and was in almost all attacking moments of the gunners as they looked for goals against Qarabag. Iwobi got one assist in that match after he set up Emile Smith Rowe who scored Arsenal’s second goal, giving them some breathing space after the home side had become  tough.

Aaron Ramsey missed Arsenal’s match against Qarabag because he told Unai Emery that he wanted to stay in London because his wife his pregnant but there are few chances that he would have played. It seems Aaron Ramsey’s transfer problems will give Alex Iwobi a boost in his quest to get into Unai Emery’s first eleven because the Welshman is currently linked with a move away from the Emirates Stadium.

Alex Iwobi replaced Aaron Ramsey last weekend when the gunners hosted Watford at the Emirates Stadium and it was very clear that the Wales international wasn’t happy and was seen snubbing Unai Emery, Iwobi on the other hand went in and changed the game into Arsenal’s favour and he also had a fantastic performance against Qarabag. So it’s a perfect time to bench Aaron Ramsey and start Alex Iwobi.