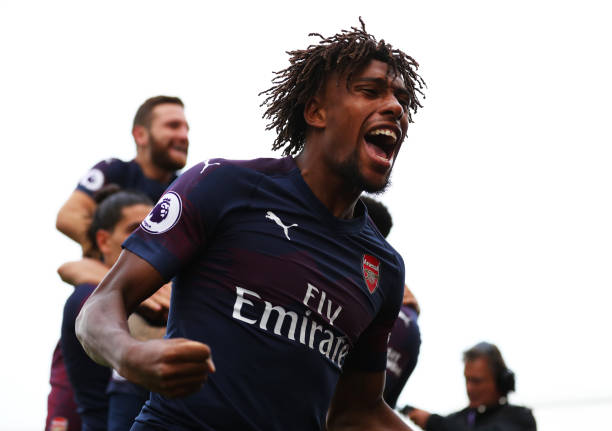 Arsenal played Fulham on Sunday and the gunners won the match 5-1 in a six goal thriller which got the fans excited because it showed that Unai Emery’s tactics are starting to work out. Alex Iwobi returned to the starting eleven after his impressive performance in the Europa League.

The Nigerian international didn’t make much impact in the Arsenal match against Fulham but he looked confident with the ball and will be hoping to get more chances in their next matches but Aaron Ramsey’s quick goal in the second half might make the winger get benched again.

Alex Iwobi was brought out of the match in the second half and got replaced by Aaron Ramsey but he was however asked after the match what he had to say about their fantastic win against Fulham, and he said via Arsenal.com that it was a bit tough in the beginning.

“It was a tough start. Fulham came out and started well, but then they conceded. The manager picked us up at half-time.”

Alex Iwobi was also asked what the foundation of the team’s great form was and he replied;

“The team spirit is better. The confidence is definitely better. We analyse the games a bit more and we’re proving to the fans as well as ourselves that we’re able to compete for the title.”

Arsenal is now in the top four and their next game will be against Leicester City after the international break. Unai Emery will be looking to see his players in action for their countries and Alex Iwobi will likely get a call up by Nigeria since the African Cup of Nations qualifiers have begun.

This is probably going to be Alex Iwobi’s best season ever because Unai Emery has found a way to get the best out of the Nigerian international.