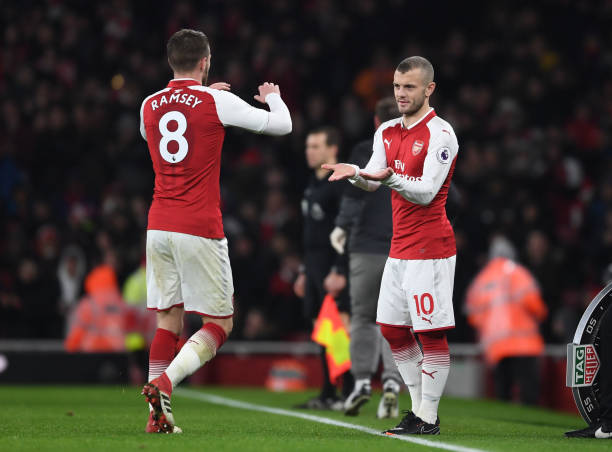 Jack Wilshere left Arsenal in the summer transfer window after his contract at the Emirates Stadium expired yet the gunners were ready to renew it but the Englishman still left the club because he was worried that he wouldn’t get enough chances.

Aaron Ramsey is also in the same situation as Wilshere because he is in the final year of his current contract at the Emirates Stadium, but it is a bit different for the Wales international because Arsenal has shown that it has let go of him after it withdrew the deal which he was about to sign.

Jack Wilshere and Aaron Ramsey were teammates for many years and the Englishman has urged the gunners to keep the Wales international because he has seen him grow into a great player. Wilshere also added that he believes that Aaron Ramsey is the future Arsenal captain in his opinion.

“He’s grown up to be a great player with Arsenal. They could do with someone like him. We know what he can do for the club.” Jack Wilshere told the Islington Gazette.

“For me he’s a future Arsenal captain. I know he loves the club. It’s difficult for me to comment on because I’m not there but I do know he’s a great player, if it was me I know I would want to keep him around.”

Wilshere says that Aaron Ramsey loves the club and this is true because his agent also said the same when he revealed that Arsenal had made its decision, he also added that they will move on meaning they won’t request the club anymore to offer him a new deal but rather look for other clubs.

Aaron Ramsey said that he won’t leave in the January transfer window and that he will continue playing for the gunners until his contract at the North London club expires. So the decision will probably be with the club to either change their mind and give him his desired deal or just let him go for free next year.

Lacazette Speaks Out On His Competition With Aubameyang