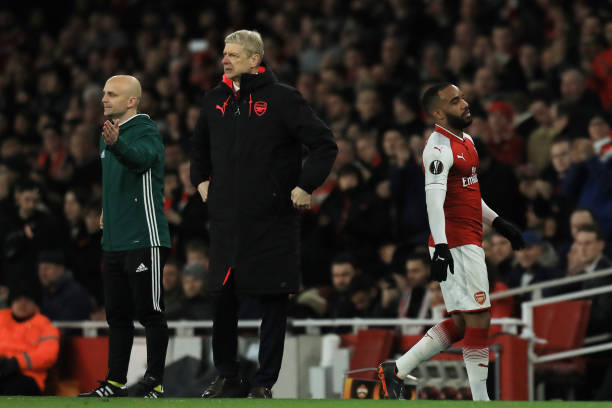 Alexandre Lacazette arrived at the Emirates Stadium in the summer transfer window and the Frenchman found life hard in England because he didn’t have the full trust from Arsene Wenger even though the fans backed him to replace Olivier Giroud in the starting eleven.

Arsene Wenger did start Alexandre Lacazette in many matches but the French manager made it a custom to always remove the former Lyon star when the gunners reach into the 60th minute because he believes that the striker will have tried his best and failed because that’s enough time according to him.

Arsenal fans were not happy with the way Arsene Wenger treated Alexandre Lacazette by always subbing him off in the second half and some football pundits pointed out that this could be one of the reasons why he didn’t impress for the gunners as expected last season.

Arsenal fans used to urge Arsene Wenger to be letting Lacazette finish the full game because it can have a negative impact on his performance and love for the club. It turns out the worries of the Arsenal fans weren’t wrong because he says that he was disappointed with Wenger’s decision to always give him only 60 minutes yet if he stayed on the pitch, he would be more effective because the opponent’s players will have become tired.

“Yes I was disappointed last season, I knew I had to score in one hour. When I talked with the coach, he has to make some choices which I have to respect.” Alexandre Lacazette said on the Premier League Today.

“When you’re a striker you want to play all the games and most chances come at the end because defenders are tired.”

“That’s why I was frustrated but it was my first season and all my family said ‘don’t be like this, enjoy the club’. Now I feel I can stay on for the full 90 minutes.”

Arsenal Fans React To The Crystal Palace Vs Arsenal Game