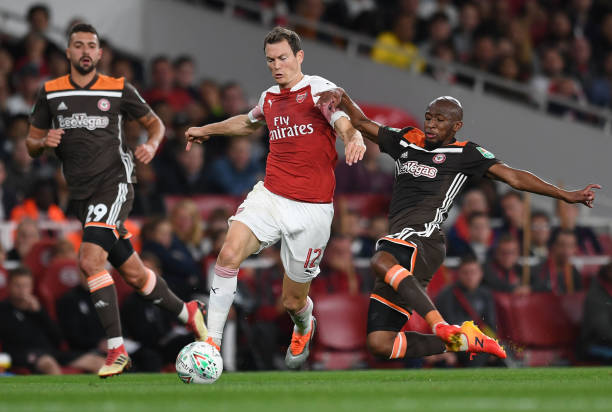 ( Arsenal Vs Brentford / Photo via Getty )

Arsenal welcome League One side Blackpool to the Emirates Stadium for their EFL Cup fourth round clash.

Arsenal’s impressive winning run of 11 games came to an end on Sunday as they conceded a late penalty to draw 2-2 at Crystal Palace. The Gunners defeated Brentford 3-1 in the earlier round last month while Blackpool eliminated Queens Park Rangers to reach the fourth round.

Emery is expected to field a changed side with youngsters and fringe players getting some quality time on the field.

Hector Bellerin is a doubt for Saturday’s clash with Liverpool after he was taken off at half time on Sunday, he is believed to have muscular pains. Nacho Monreal and Sead Kolasinac both have both been struggling with thigh problems but are expected to return in the coming days while Konstantinos Mavropanos and Laurent Koscielny remain sidelined. Ainsley-Maitland Niles is in contention to make his first appearance since August after recovering from a leg fracture. Mohammed Elneny picked up a thigh injury during training and has been ruled out for two weeks.

Emery called up four youth players, Joe Willock, Smith-Rowe and Nketiah among those.

Arsenal and Blackpool last met during the 2010-11 Premier League season, with the Gunners winning both matches, including a 6-0 hammering at the Emirates.

Arsenal will be seeking to reach the quarter finals of this competition for the third season in a row.