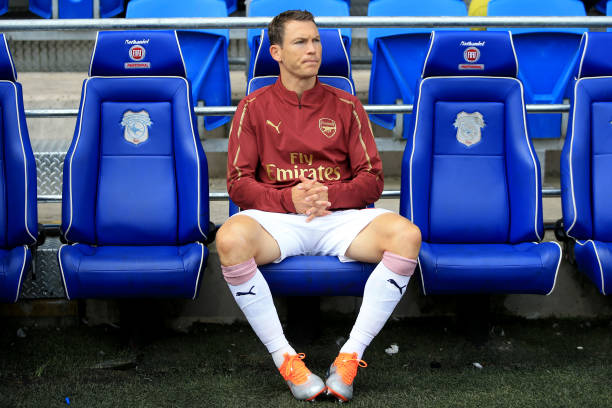 The gunners signed Stephan Lichtsteiner on a free transfer from Juventus and he is a veteran right back who has been outstanding in the Italian Serie A but he has however been benched by Unai Emery this season.

Even though it must be odd but it’s Stephan Lichtsteiner that is grateful to Arsenal for signing him not that the gunners are grateful that a player of his calibre agreed to come to the Emirates Stadium, he also said that he is happy with the North Londoners for giving a chance to an old player like him to play for them.

Arsenal’s first choice right back is Hector Bellerin and the former Juventus star has failed to win over that position because he hasn’t had great performances in the few matches he has played so far. So let’s take a look at the two matches which he will take part in.

Unai Emery will be hoping to see a splendid performance from him because a win against Sporting Lisbon will help them keep their position as group leaders in their Europa League group E table.

Stephan Lichtsteiner will probably be selected in the Arsenal squad that faces Blackpool because Unai Emery will want to make his players happy that aren’t getting enough chances this season.

Arsenal fans have over the last few weeks criticized Hector Bellerin for his poor performances but the Spanish international has improved in Arsenal’s last two Premier League matches and has got back the support of the fans hence Stephan Lichtsteiner’s chances of breaking into Unai Emery’s first eleven have become harder.