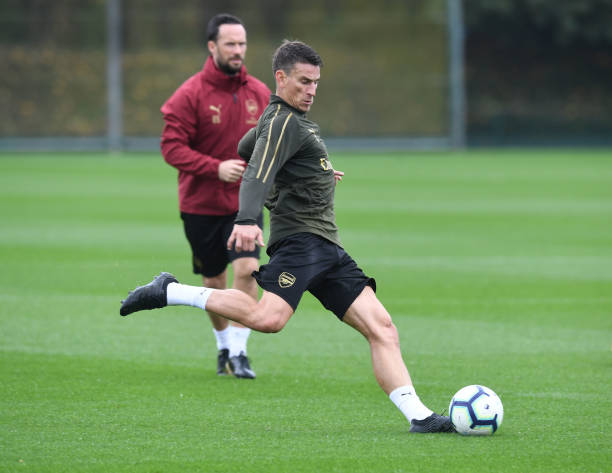 Laurent Koscielny is Arsenal’s main captain for the 2018/19 season but he is unfortunately still on the sidelines due to an Achilles injury which he sustained before the end of last season.

The Frenchman missed the FIFA World Cup due to this injury but he has worked hard so that he could get back on the pitch since his time at the Emirates Stadium is running out, Koscielny has even hint at retiring from football after his spell with Arsenal.

Arsenal head coach Unai Emery says that Laurent Koscielny is an important player because he is their captain, the boss also revealed how the veteran defender is progressing well ahead of his much awaited come back in November.

“He is very important for us because he is our captain, he is starting this week to do some training with us together and it is very, very good news for us.” Unai Emery told Arsenal’s official website.

“I think we need also to give confidence to him, to be close with us, because it was a big injury. But now he is getting better, he is training with us in some things and this is very positive”.

Arsenal fans can’t wait to have Laurent Koscielny back because he is considered to be their best centre back. They will however have to wait until November until the French defender could finally make an appearance for the gunners this season.

Laurent Koscielny is Arsenal’s main captain but is uncertain whether this will urge Unai Emery to start using him when he comes back. Koscielny announced his retirement from international football recently.

Lacazette Speaks Out On His Competition With Aubameyang

Cech or Bernd Leno, Unai Emery Hints At Who Will Play On Monday