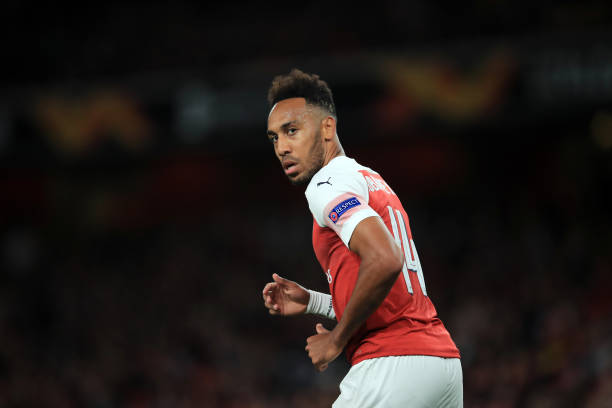 Pierre-Emerick Aubameyang arrived at Arsenal in the 2018 January transfer window and he found at Arsenal Alexandre Lacazette because who had come to the Emirates Stadium in the summer.

The two strikers are at the North London club now and they have given Unai Emery headache on how to use both since his formation can only accommodate one striker. Unai Emery first tried playing just one of them in the striking role but they showed that they are better together, the Arsenal fans pressured Unai Emery to be using them together and he also accepted their wish.

Aubameyang is a striker but he has been forced to play on the wing since that’s the only way he can play together with Lacazette but it is very clear in Arsenal’s last three Premier League matches that the Gabon international isn’t comfortable in that position because he is used to playing in the striking role.

Alexandre Lacazette has made sure to prove that he well deserved to be Arsenal’s main forward this season and Unai Emery can’t just start benching him again to use Aubameyang in that position, so this is going to be a tough problem for the former Borussia Dortmund attacker because he might find himself on the bench in Arsenal’s next Premier League match.

In Arsenal’s match against Everton, Aubameyang scored but it was clear that the striker wasn’t good throughout the whole match until he scored that goal. He was selected in the starting eleven that faced Watford last weekend but failed to make any significant impact apart from some runs to put the defenders of the Hornets on pressure, he then got later subbed to bring in a real winger (Alex Iwobi ) who really changed the whole match to Arsenal’s favour.

The truth is that Pierre-Emerick Aubameyang is a versatile player but we are not seeing more from him because his being played on the left flank, it seems modern managers don’t like using the 4-4-2 formation anymore yet it would be beneficial to the North Londoners because this would see Lacazette and Aubameyang play together comfortably.

What Are Arsenal’s Chances Of Winning The Europa League?

Is The Torreira-Xhaka Partnership Working?