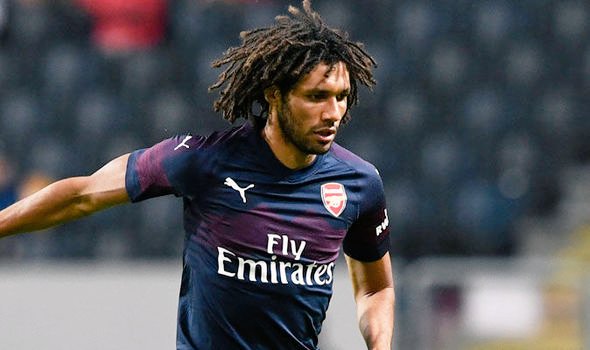 Arsenal midfielder Mohamed Elneny arrived at the Emirates Stadium in January 2016 but the Egyptian international failed to become a regular for the gunners in Arsene Wenger’s reign but it seems the same thing is happening in Unai Emery’s regime, he isn’t getting enough chances.

The January transfer window is around the corner and the transfer rumours have already begun, and the North Londoners are linked with a move for Villarreal midfielder Pablo Fornals who has been impressive in the Spanish Laliga. The Spanish international has a release clause of £17.8million and The Sun claims that the gunners are ready to sell Mohamed Elneny in January in order to raise the required amount to sign the Villarreal man.

Pablo Fornals of Villarreal CF in action during the La Liga match between Villarreal CF and Valencia CF at Estadio de la Ceramica on September 23, 2018 in Vila-real, Spain (Photo by David Aliaga/NurPhoto via Getty Images)

It is believed that Unai Emery wants Pablo Fornals to replace Aaron Ramsey who is likely to leave in the January transfer window because the gunners don’t want to lose him for free in the 2019 summer transfer window. Pablo Fornals might not be at the same level as Ramsey but Unai Emery probably wants him because he fits well into the playing style which he has introduced at the North London club.

Mohamed Elneny is unlucky because he was happy at Arsenal in the last two seasons even though he wasn’t getting enough playing time but it seems he might be on his way to Leicester City who are ready to give the gunners £15million to bring him to the King Power stadium. The gunners will need to top up on the amount they get from selling Elneny to activate Pablo Fornals’ release clause of £17.8million.

Denis Suarez responds to rumours linking him to Arsenal

Revealed: How much Arsenal needs to sign Ousmane Dembele