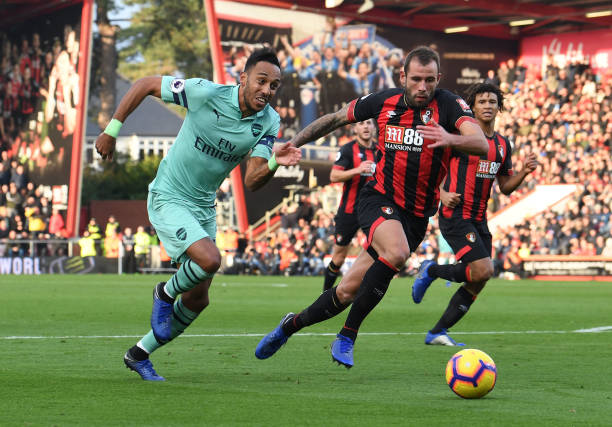 Pierre-Emerick Aubameyang was selected in the starting eleven of Arsenal that played against Bournemouth on Sunday and the Gabon international won the match for the gunners in the second half after he scored a neat tap in-goal to take the North Londoners into the lead.

Aubameyang was being used in the left-wing position in the last few weeks but he however started in the central striking position today because the gunners were without Alexandre Lacazette who missed the match because of a groin injury. The Gabon international was asked on if he believes that they caught Bournemouth off guard when he scored the second goal, he replied;

“Maybe! I think Alex gave the ball to Sead and I just sprinted into the area, then he gave me a good pass.” Aubameyang told Arsenal.com.

Aubameyang will be glad that he scored that goal because he is now still in the race for the 2018/19 Premier League golden boot and since he was on the score sheet today, he will be in the starting eleven of the gunners in their upcoming EPL matches. Arsenal is now in the fifth position on the Premier League table and are on an unbeaten run of 16 matches, Aubameyang was asked on if he believes that they are building something great under Unai Emery.

Unai Emery speaks out on why he axed Mesut Ozil