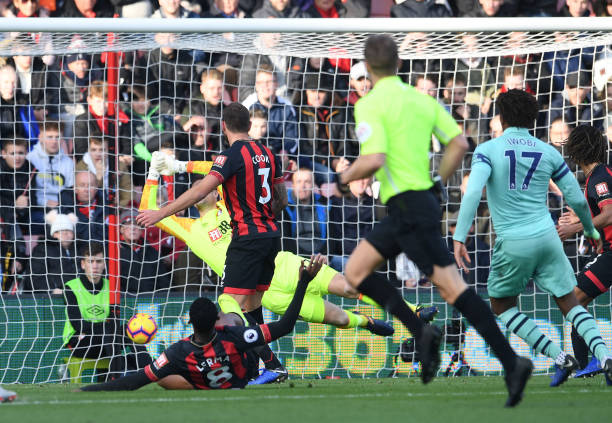 ( Bournemouth Vs Arsenal / Photo via Getty )

It was a scrappy win for Arsenal yesterday at the Vitality stadium. A difficult place to go to considering the fact that Bournemouth has only lost once at the Vitality Stadium prior to yesterday’s match. Despite the 2 week interlude, Arsenal started the game on a back foot. A goal was scored as early as the 8th minute by Brooks but the goal was incorrectly judged offside, if the goal had stood then that would have altered the complexion of the game.

Instead Arsenal had a gift of a goal as £25 million Lermar turned Kolasinac’s teed cross into his own net. As usual this season, Arsenal couldn’t hold up the lead as they wobbled in the third half of the home team for a counter that resulted in a goal. Iwobi lost possession for the silliest of ideas and the home team took advantage and the visitors paid for it.

Hostilities resumed in the second half as Arsenal took the initiative and scored through Aubameyang. An all most effortless finish. Bournemouth sought for the equaliser but Arsenal’s Bernd Leno did a yeoman’s job by denying the home team any form of hope.

According to xNerd stats. Arsenal had 20 attempts, 4 on target,1 goal. Arsenal needs to upgrade their wide positions. They need players with pace, more technique and real width. Mkhitaryan and Iwobi cannot offer them such stability and quality depth in that area of the pitch. They also need players with much grit and pace in the middle as it was evident that Torreira was overwhelmed covering for Xhaka and himself.

BOURNEMOUTH, ENGLAND – NOVEMBER 25: Bernd Leno of Arsenal saves the ball over the top of Callum Wilson of AFC Bournemouth during the Premier League match between AFC Bournemouth and Arsenal FC at Vitality Stadium on November 25, 2018 in Bournemouth, United Kingdom. (Photo by Mike Hewitt/Getty Images)

Looking at Bournemouth’s break away goal it would be noticed that Xhaka was nowhere to be seen same as Torreira and Bellerin leaving Rob Holding with two Bournemouth players to deal with. Arsenal plays Spurs this Sunday, it cannot afford to make such mistakes as we saw how Chelsea was taken to the cleaners. Same tactics will be employed against Arsenal at the Emirates. Arsenal must bring their A-game so as to avoid what happened to Chelsea.

It was a hard-fought game and luckily for Arsenal they got 3 points away for the fourth time this season, a feat they couldn’t muster last season. Arsenal needs to be weary when take on their North London rivals.Will they ride their luck against Spurs. Only time will tell.

Report: Why Unai Emery will struggle to beat Southampton

Arsenal: Why Unai Emery was right to bench Mesut Ozil