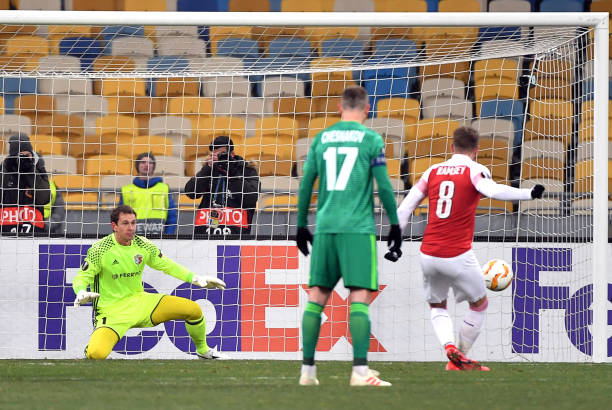 ( Vorskla Vs Arsenal / Photo via Getty )

Arsenal has confirmed its qualification to the UEFA Europa League round of 32 as group leaders even though there’s still one more match remaining before the group stages end. They defeated Vorskla with a youthful team and this shows that they will use the same against Qarabag.

INTERESTING FACTS AND STATS ABOUT ARSENAL’S MATCH AGAINST VORSKLA

-( Vorskla 0-3 Arsenal halftime)This was just the fifth time that Arsenal have been ahead at half time in a game this season (20th game in all competitions), while they’ve gone on to win each of the previous four.

-Joe Willock became the 21st different goalscorer for Arsenal in the Europa League since the start of last season.

-Arsenal have won their first away game against Ukrainian opposition having drawn one and lost four of their previous five such matches.

-Excluding qualifiers, Arsenal has kept three consecutive away clean sheets in European competition for the first time since a run of five enroute to reaching the 2005-06 Champions League final.

-Emile Smith Rowe has scored three goals in his last four appearances for Arsenal in all competitions.

-Since the re-branding of the competition in 2009-10 no Arsenal player has scored (five) or been directly involved (six) in more Europa League goals than Aaron Ramsey.

Some of these stats show that the gunners have improved this season, for example, the gunners had never won a game against a Ukrainian side in Ukraine but they got the win this time.

Aubameyang speaks out on replacing Lacazette in striking role

Unai Emery speaks out on the UEFA Europa League competition