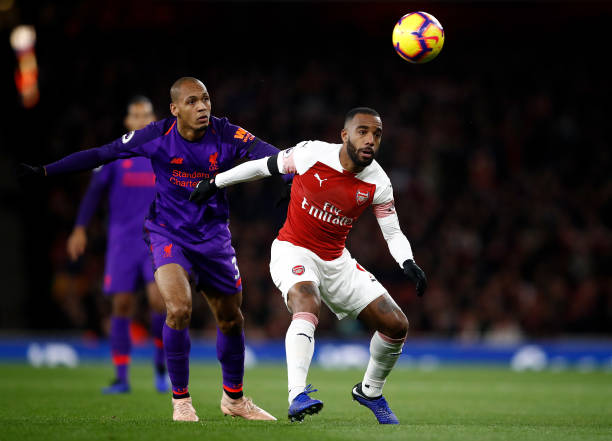 Arsenal signed Alexandre Lacazette from Lyon in the 2017 summer transfer window and this is actually his second season at the Emirates Stadium. His first season at Arsenal wasn’t impressive as the fans expected because they believed that a striker of Lacazette’s calibre would be able to help them win the Premier League.

Alexandre Lacazette scored 10 goals in all competitions last season and the fans were however upset that Arsene Wenger had made it a tradition to always subsitute the Frenchman in the 69th minute. Lacazette did speak on that issue recently and said that it was one of the reasons why he under performed last season.

Alexandre Lacazette has played in only the French Ligue one in his footballing career but he is now testing out the Premier League for the first time, he has revealed why it’s tougher to score in EPL than the French League.

“When you receive the ball in France, maybe you have one metre more so you can manage the ball. Here, defenders don’t care about who you are.” Lacazette told Ian Wright at the Premier League website.

“Most of the chances came at the end because the defenders are tired.”

The Premier League is considered to be the most competitive league in Europe because of its intensity and most players don’t like going there because of this season. Alexandre Lacazette has however made this risk and is doing alright so far even though he hasn’t started banging in many goals for the North Londoners.

It seems Unai Emery trusts and he usually plays the full 90 minutes this season, the Arsenal fans will be hoping to see him score about 15+ goals in this 2018/19 campaign.

VAR To Be Introduced In The Premier League Next Season