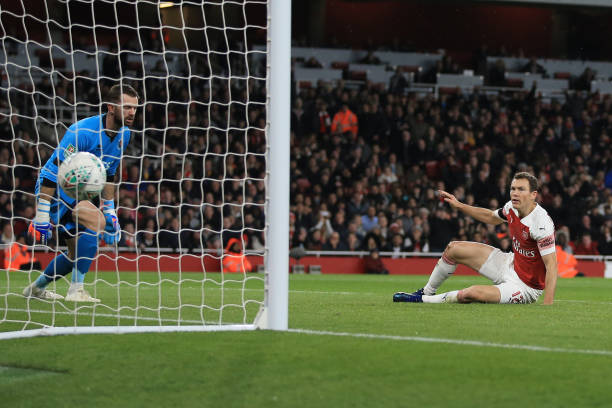 Arsenal has qualified to the next round of the Carabao Cup after getting a 2-1 win over Blackpool on Wednesday night and the gunners are now unbeaten in their last 13 matches. Carl Jenkinson, Stephan Lichtsteiner and Aaron Ramsey were selected in Arsenal’s lineup to face Blackpool on Wednesday, so I am going to rate their performances out of 10.

The Swiss international was played in the left back position against Blackpool, that’s somewhere he isn’t used to playing in but he was very firm in it especially in the attacking aspect of the game. He was always trying to get involved in Arsenal’s attacks on his flank because that’s what modern full backs do instead of being in the back. His speed and great runs finally paid off as he asked for a cross from Matteo Guendouzi and the youngster sent it, and the full back just tapped on the ball and it went into the back of the net, it was a great move by him.

Defensively, he was a bit clumsy because he is a right back yer he this time was used in the left back position but he always tries to run back when the opponents take the ball and isn’t easily exploited on his flank because he is very strong.

LONDON, ENGLAND – OCTOBER 31: Carl Jenkinson of Arsenal during the Carabao Cup Fourth Round match between Arsenal and Blackpool at Emirates Stadium on October 31, 2018 in London, England. (Photo by Marc Atkins/Getty Images)

It had been 701 days since Carl Jenkinson last made an appearance for the gunners, what performance can you expect from a player who has spent all that time without playing for his team? You would expect a poor performance from him and no good mentality from that player. But Carl Jenkinson has surprised most critics on Wednesday after he put on a top performance and he looked very fresh and you would imagine that he has played every week.

He looked very composed at the back and was also showing that attacking mentality as shown by Bellerin when moving forward. He had a great game and I believe that the coach will be using him more often in this competition and others like the UEFA Europa League.

LONDON, ENGLAND – OCTOBER 31: Aaron Ramsey of Arsenal runs with the ball during the Carabao Cup Fourth Round match between Arsenal and Blackpool at Emirates Stadium on October 31, 2018 in London, England. (Photo by Shaun Botterill/Getty Images)

Aaron Ramsey was selected in Arsenal’s lineup that faced Blackpool on Wednesday despite the recent report by Sky Sports which claims that the Wales international will leave the Emirates Stadium at the end of this season. Aaron Ramsey looked hungry for a goal in their encounter with Blackpool but he however failed to get any good chance and he failed to create his own chances too.

He tried making a perfect combo with Matteo Guendouzi and the youngster would try sending through balls to him but he failed to control them or they were cleared. I give him a 6 for making the Arsenal midfield composed because he gave Guendouzi and Maitland-Nile help many times.

You can also tell us in the comments on what you have to say about the performance of the three above!

Why Matteo Guendouzi Missing Liverpool Game Is A Blessing In Disguise

Arsenal Vs Blackpool Synopsis And Prediction