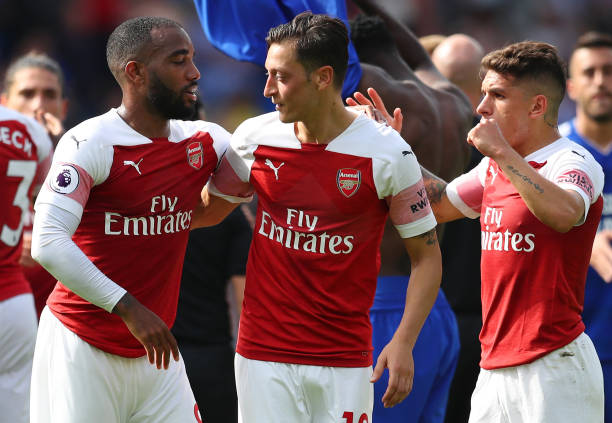 Mesut Ozil arrived at the Emirates Stadium in 2013 while Alexandre Lacazette joined Arsenal last year but these two have become one of the most important players at the club and everyone appreciates their great performances including their own teammate Lucas Torreira.

Arsenal completed the signing of Lucas Torreira this summer and the Uruguayan international has also become one of the fan favourites at the Emirates Stadium because he has helped make their midfield stable this season. Lucas Torreira has played with both Mesut Ozil and Alexandre Lacazette for a few months but the midfielder has acknowledged the impact his two teammates have while they are on the pitch, he says that he admires them so much because they are really great people.

“Mesut and Laca are wonderful players and people.They bring in that quality touch that the team needs. They dictate the tempo in every play of the game. Laca is in great scoring form, which is really important for us.” Lucas Torreira told Arsenal Player.

“On the other hand, we know that Mesut is a top player. If you pass him the ball he will hardly ever give it away. He plays with simplicity and he’s got a lot of quality, which makes us very calm.”

Lucas Torreira also added that he always feels calm when he passes the ball to Mesut Ozil because he knows how the German international won’t lose it because he always handles it well. Torreira also said that he was happy to know that his locker would be in between the ones of Alexandre Lacazette and Mesut Ozil, he says that it is a privilege.

Arsenal will need to use all these three, Lucas Torreira, Alexandre Lacazette and Mesut Ozil to beat Liverpool tomorrow because the gunners haven’t lost any match this season when these three have begun together.