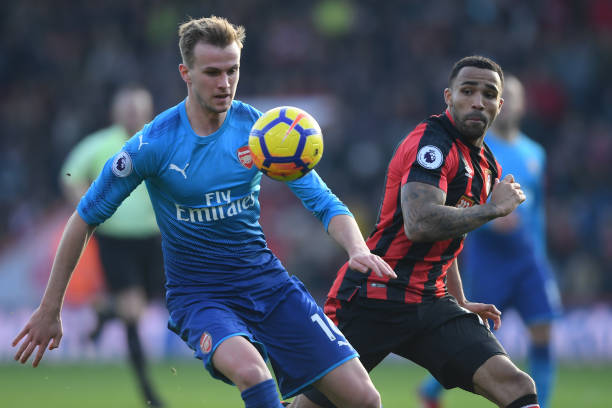 It looks like Arsenal is finally ripping the benefits from the acquisition of England U23 and Former Bolton wanderers defender Rob Holding . After a sudden injury to Sokratis during the match against Everton, Unai Emery gave a chance to the young centre back to play. Ever since then, the young man has grown from strength to strength and is improving in each game.

Despite Sokratis and Koscielny being the most experienced centre backs in the team, injuries have kept them on the sidelines. In their absence, an exciting partnership with Mustafi has been made. I believe this should not be disturbed. A player should only lose his place due to underperformance. In addition to that perhaps as part of a normal rotation of rest to keep the player fresh and fit the longest period possible.

Rob Holding may not possess the speed of Arsenal’s other defenders but his positional awareness allows him not caught out of position. In Arsenal’s last game against Wolves, I was impressed with the way he defended. Holding couldn’t catch Adama Traore but did just enough to delay an early shot on target giving the keeper a chance to come out and reduce the angle for the attacker.

Many will also attest to Rob Holding’s calmness on the ball he is also less likely to be handed a card as he is very disciplined. It wouldn’t be prudent to drop the English U23 unless the manager has seen it fit during training. The prospect of having so many defenders who can put in a good shift is exciting to be honest.

This means we can be sure that in any case of injuries,Arsenal has enough depth to cover up the gap. We should remember that Arsenal is still unbeaten in 16 games this season, many never thought Arsenal could achieve such a result just a season after Wenger! This has come notably without its best defenders at the back. I would prefer Sokratis prove himself in cup competition because Rob Holding is performing well in the Premier League.

Should Unai Emery start both Lacazette and Aubameyang today

Why Arsenal should not sell Mohamed Elneny