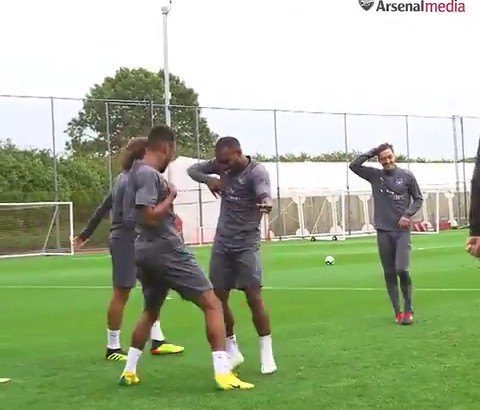 The international break is over and club football is club, Arsenal will this weekend face Bournemouth and Unai Emery’s has begun preparing his squad. The Arsenal squad trained on Friday and Saturday. Aubameyang and Lacazette were selected in their national team squads but didn’t go there because they had slight injuries but they are now fully fit.

The two Arsenal attackers took part in yesterday’s training sessions and it seems they aren’t only goal scoring machines but are apparently also good dancers. The Arsenal media uploaded a training clip of the Arsenal players at the London Colney and you can see Aubameyang and Lacazette taking everyone’s attention as they make some interesting dance.

You can see Mesut Ozil also making some dance moves and one of the Arsenal fans joked in his reply to the above video; “Ozil is assisting as always”. The other Arsenal supporters replied saying that they are happy that there’s always fun in training hence raising the team spirit of the North London club.

Aubameyang has scored seven goals in the Premier League so far and he will be hoping to increase on that number this Sunday when they make a visit to the Vitality Stadium. Lacazette will also be hoping to impress in their next matches.