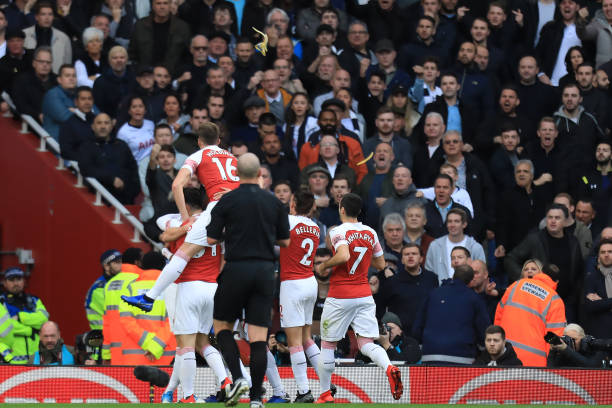 Arsenal has continued its unbeaten run today by beating Tottenham Hotspur 4-2 at the Emirates Stadium and their win against their arch rivals sends as a warning message to their upcoming opponents like Manchester United. The North London Derby was a six goal thriller, there’s nothing more you can ask for from this kind of fixture.

The match started off well for the gunners because they had full control of the game and got their first goal of the day through Aubameyang who scored a penalty after a Spurs player caught the ball in his own box. The gunners didn’t hold onto their lead for a long time as Sokratis made a poor foul near the Arsenal box which resulted into a free kick, the free kick was sent in beautifully and Dier equalised for Spurs making it 1-1.

Things started going bad for the gunners as Spurs midfielder Son was supposedly brought down by Rob Holding in the box hence them getting a penalty and Kane made no mistake but to send the ball into the back of the net, he sent Bernd Leno the wrong way. The second half ended 1-2 in favour of Tottenham Hotspur.

Unai Emery made two changes at the start of the second half, Lacazette and Ramsey replaced Mkhitaryan, these two improved Arsenal’s attack line because they are very strong when the match is very physical. Arsenal got their third goal of the day after Ramsey sent in a great ball to Aubameyang who equalised to make it 2-2.

Arsenal now got back its momentum and they got their third after Alexandre Lacazette received the ball on his feet and sent in a great shot which luckily got into the back of the net. Lucas Torreira made it 4-2 in a beautiful move which saw him face Loris one on one and the Uruguayan international sent the ball past the goalkeeper. So Unai Emery goes home a happy man and will now prepare for their match against Manchester United.