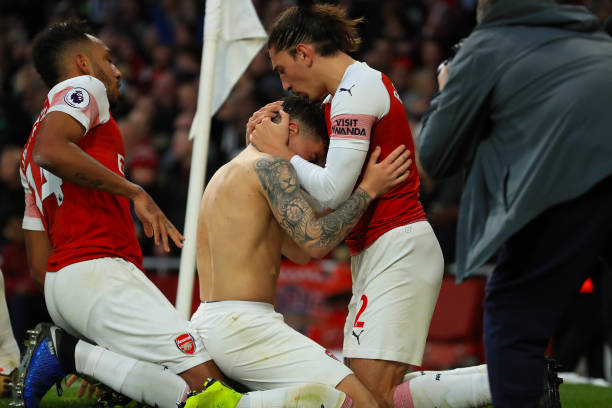 Unai Emery had a happy induction in the North London Derby fiesta as his team dispatched Spurs with an emphatic 4-2 victory. This victory ensured that the Gunners maintain their 19th unbeaten streak in all competitions.

The match indeed lived up to its hype as both teams displayed quality on the pitch. The North London created a rather feisty atmosphere as squabbles,tempers flaring,red cards, simulation and controversial decisions typical of derbies was evident in the game. Unai Emery & Mauricio Pochettino decided to stick with their formations from last week against Bournemouth and Chelsea respectively.

Unai Emery started 3-4-2-1 formation with Iwobi & Mkhitaryan playing inside forwards and no place for crocked Mesut Ozil who was out with a back spasm. Arsenal ensured they begin proceedings on a sure foot as they mounted enough pressure on the Tottenham defence line with Aurier and Foyth looking suspect.

Arsenal drew first blood as Jan Vertoghen was adjudged to have handled the ball in the box. The resulting penalty was tucked beautifully in to the net sending Hugo Lloris the wrong way. Arsenal pressed for a second goal but Lloris was able to deny Iwobi and the rebound shot from Bellerin was blocked by Ben Davies.

Spurs continued with a midfield diamond from last week against Chelsea, just as Dele Alli tried to outwit Torreira preventing him from advancing but Arsenal had other ideas as they knocked the ball to the flanks ensuring their wing backs press forward,  Son Heung-Min was a bright spot for the visitors as he threatened the home team’s 3 man defence with his speed and trickery and got a free for his troubles.The resulting free kick from Eriksen found Eric Dier at the near side who got a head to the ball which bounced awkwardly as Leno deflected the ball into his own net.

Pochettino decided to switch formation just as Son found his spot in the 18 yard box and collapsed under minimal contact from Holding. Mike Dean,the ref for the game pointed to spot. Harry Kane made no mistake as he put the ball past Leno, scoring his 8th goal in 8 games in a North London Derby. Arsenal were down 2-1 at half time a constant feature this season.

Three second half goals from Aubameyang,Lacazette and Torreira summed up Spurs evening as they were outplayed in every department of the game.

Arsenal had quite a game against Spurs. Their come back has ensured they leap-frog their rivals in to fourth place. Arsenal travels further north to Old Trafford for a date with Manchester United on Wednesday.

Lucas Torreira comments on his goal against Tottenham Hotspur