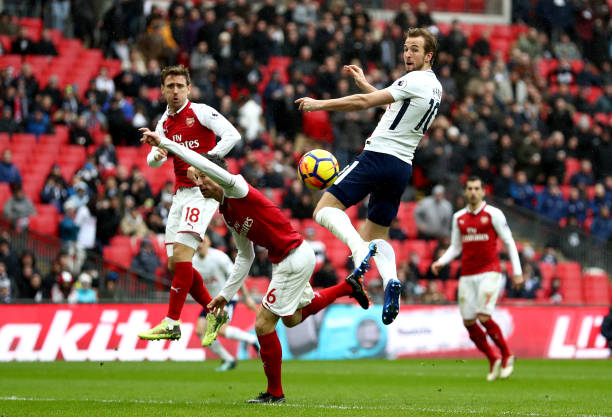 The first match played by these two teams was a friendly match that was stopped 75 minutes into the game due to poor lighting. The match was played on the 19th November, 1887.

The first competitive match between the two teams was on the 9th of November,1896 in the South League as Arsenal defeated their North London rivals by 2 goals to 1. Arsenal’s two goals were scored by Russell while the Spurs got their got their goal through McElhany.

As quoted on the Arsenal History Society website, in 1908, Tottenham joined the second division (by which time Arsenal were in the first). Five years later in 1913 Woolwich Arsenal moved to Highbury.

LONDON, ENGLAND – FEBRUARY 10: Alexandre Lacazette of Arsenal shoots and misses during the Premier League match between Tottenham Hotspur and Arsenal at Wembley Stadium on February 10, 2018 in London, England. (Photo by Laurence Griffiths/Getty Images)

Tottenham Hotspur championed the objections to Arsenal’s move – even though as the League and FA had both said time and again before, there is nothing in the rule books that allows them to dictate where a club plays. Besides which if anyone ought to have an objection it was Orient. The Os are the second oldest Football League club in London behind Fulham.
The rivalry went a notch as Arsenal got promoted to the first division and Tottenham got “angry”.

Fast forward to present time, the rivalry has become somewhat intense and based on H2H from the last 10 North London derbies

Tottenham average scored 1.83 goals per match in 2018 season. At the back of this, both teams would be aiming for bragging rights.Tottenham go into this match with 5 wins on the bounce while Arsenal have drawn 3 matches and won 2. Both teams have played 169 times, Arsenal wins 67 times with Tottenham winning 53 times.Both teams drew 49 times. The match is expected to live up to its billing. Arsenal are unbeaten in the league since the their loss to Manchester City and Chelsea.

Unai Emery gets injury boost ahead of Spurs game