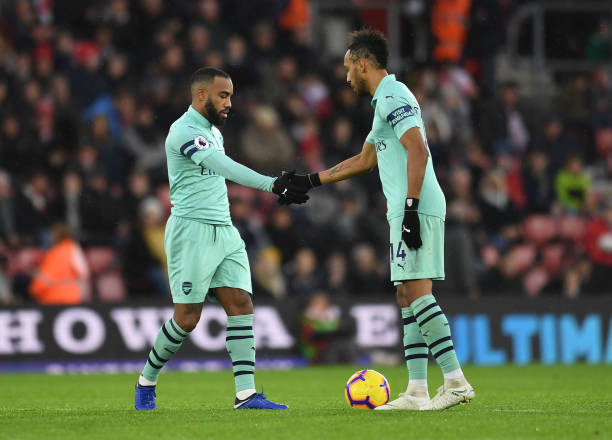 Arsenal signed Alexandre Lacazette in the 2017 summer transfer window and they also brought Pierre-Emerick Aubameyang in the 2018 winter transfer window, and these two have formed a great friendship on and off the pitch and the Arsenal fans absolutely love them both.

Arsenal usually makes many media videos for the fans to enjoy and among those programs, is the unclassic match commentary which sees two Arsenal players make “commentary” about a certain game. The Arsenal fans love the great relationship between Aubameyang and Lacazette and have for long been calling on the club to make a commentary video of these two, their wish has finally come true because the club released it yesterday.

Aubameyang and Lacazette’s unclassic commentary episode was of the recent North London Derby and the Arsenal fans really enjoyed it since they love these two, and it was sort of a reliever after loss against Southampton. It was great commentary from the two strikers but they could have trolled their teammate Alex Iwobi in the video because they talked about his indecisiveness in a funny way.

The club uploaded the video on its official YouTube channel and you can watch it below.

And the camera rolls back to Iwobi trying some tricks and dribbling.

Laca: What what? What are you doing?

Auba: Why man’s doing this?

And then a big laugh between the two breaks out and they continue with the commentary and it seems Arsenal fans enjoyed that part because most of them commented saying its their favourite part.

Mesut Ozil does something special for a young Arsenal fan