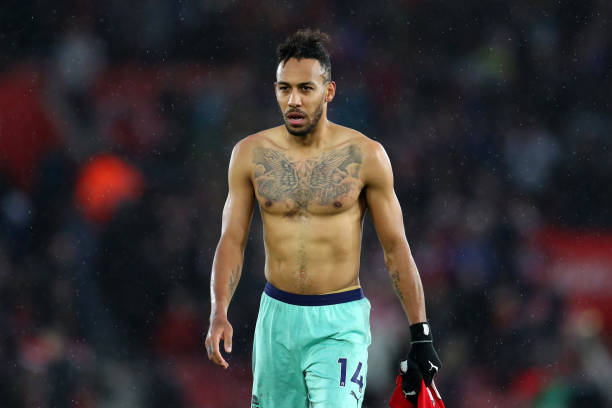 Today has been a very disappointing day for the Arsenal fans because their unbeaten run has been ended by a team that is fighting relegation but here are the things that we noticed in this game which showed that Unai Emery still has a lot of work to do.

AUBAMEYANG IS GREAT BUT WAS VERY BLUNT IN HIS FINISHING

Aubameyang is an outstanding striker that has scored over 20 goals each season in the German Bundesliga but the Premier League is a very competitive league that needs you to be on top of your game every week.

Aubameyang started as a solo striker today and he got a delightful chance in the opening minutes of the game after Matteo Guendouzi sent in a great through ball to him, and the Gabon international controlled it but was stopped by the Saints goalkeeper. Aside from that, he did get some more chances in the game but he didn’t use them well and unlike Lacazette, he doesn’t usually try to look for the ball in the midfield.

ALEX IWOBI HAS UNDERPERFORMED IN THE LAST 4 PREMIER LEAGUE MATCHES

Every coach usually has his favourite players and Alex Iwobi must probably be among the players which Unai Emery loves the most. Alex Iwobi was very impressive in September and October but he has in the last few weeks been having poor performances, and was usually substituted at the start of the second half.

Alex Iwobi’s wing was very weak in the first half apart from when he made the pass to Monreal who assisted Henrikh Mkhitaryan’s beautiful header. In the second half, after the gunners changed the formation, it looked like he was going to have a good performance but he didn’t send in any good crosses despite getting more space.

Arsenal fans were busy urging Unai Emery to bring in Mesut Ozil on social networks and their wish was finally fulfilled as Unai Emery brought him in to replace Alex Iwobi. The gunners have this season showed that they are the kings of come backs and Mesut Ozil was supposed to be the one that changes the game to Arsenal’s favour but he was rather partly at fault for Austin’s late winner.

Mesut Ozil received the ball many times and one would hope that he shows his creativity but he would just pass the ball back to Matteo Guendouzi, the youngster to make the necessary crosses.