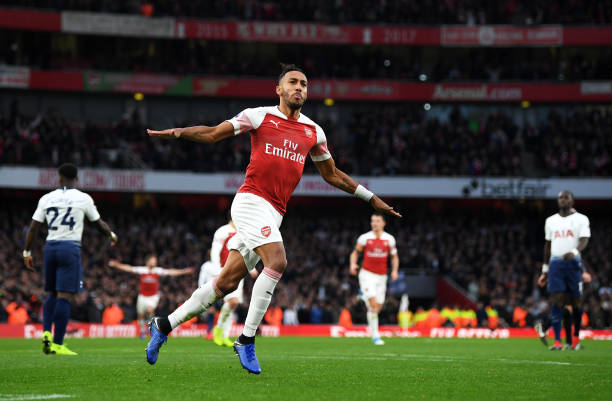 Arsenal faced Tottenham Hotspur yesterday and they won the game 4-2 after an impressive performance from the gunners. Aubameyang was among the top performing players on the pitch and he scored a brace for the gunners to become the Premier League top scorer for now.

Pierre-Emerick Aubameyang arrived at the Emirates Stadium in the January transfer window and he has been impressive ever since then and most Arsenal supporters still can’t believe that he joined them because they were linked with him in many transfer windows. Aubameyang was scoring over 20+ goals in each season for Borussia Dortmund and the Arsenal fans will be hoping to see him make the same in the coming months, he currently has 10 goals.

Aubameyang’s first goal yesterday was scored via a spot kick but the second one was a beauty because the Gabon international fired in a great shot which left Hugo Lloris helpless as he saw the ball go into the back of the net. Aubameyang has made a promise to the Arsenal fans that he will soon start performing at 100% of his abilities.

“I think I’m not at my 100 per cent, but it is coming. It’s coming. Against Tottenham, I felt very good on the pitch and I am really happy. But my best form is coming.” Aubameyang told Arsenal.com.

The gunners will on Wednesday face Manchester United at the Old Trafford and the North Londoners will be hoping to continue their unbeaten run by defeating the Red Devils to collect the three points, and also staying in the Premier League top four.