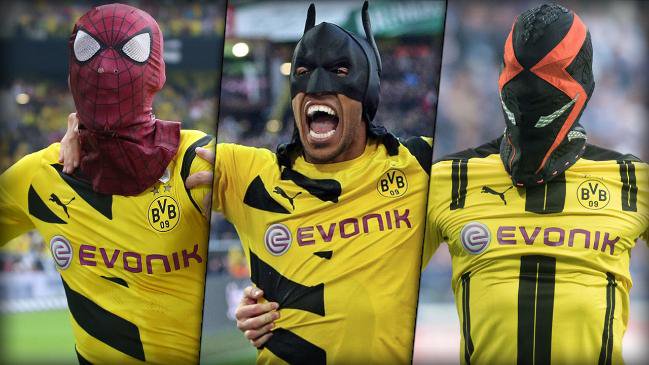 ( Aubameyang wearing his mask when celebrating )

Arsenal signed Aubameyang from Borussia Dortmund in the January transfer window and the striker was a goal scoring machine in Germany, he would score 20+ goals in each season and also used to make some crazy celebrations, like wearing the Batman and Spiderman masks/costumes.

Aubameyang has so far scored eight goals this season and he has so far participated once in the North London Derby which ended 1-0 in favour of Spurs last season. The Gabon international will however this time hope to get on the score sheet on Sunday because he understands how this game is very important for the Arsenal fans due to the immerse rivalry between the two clubs.

Aubameyang was asked in an interview if he would celebrate with a mask if he scores against Tottenham this Sunday and he said that it depends on his current mood. So the Arsenal fans will be hoping that his mood is good when they face Tottenham Hotspur on Sunday.

“We’ll see, it depends on my mood. I remember a derby when I took the Batman mask in Dortmund, I had the idea in the morning. I called my cousin and said, ‘OK, go buy this mask.” Aubameyang told Sky Sports.

Aubameyang scored against Bournemouth on Sunday last week and so he will probably be in the starting eleven of Arsenal that takes on Tottenham Hotspur this weekend.

Aubameyang speaks out on replacing Lacazette in striking role