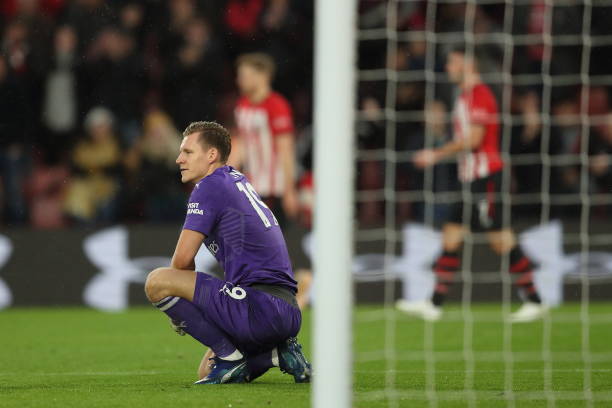 The gunners were welcomed at the Saint Mary’s Stadium by Southampton on Sunday and they lost the match 3-2 because of poor defending, and a disappointing performance from Bernd Leno who was partly at fault for all the three goals scored by Southampton.

The match started poorly for the gunners as a great header from Ings took the Saints into the lead but Arsenal recovered that goal after Henrikh Mkhitaryan also scored via a header in the 28th minute. Just as the Arsenal fans thought that they could now win this game, Ings scored at the brink of halftime to give the home side a 2-1 lead in the first half.

The gunners later equalised in the 53rd minute through Henrikh Mkhitaryan who this time scored by shooting a low shot which went into the back of the net after being deflected. Saints scored the winning goal in the 85th minute after Bernd Leno failed to stop a cross even though he stretched his hands and Austin effortlessly just headed home to make sure that his team got all the three points.

Bernd Leno was seen having a chat with Austin after the game but football pundit Roy Keane has slammed the German goalkeeper for acting that way when he should have just went straight to the tunnel.

He headed into the back of the net
Austin and Leno speak after the final whistle following their shared involvement in the winning goal for Southampton pic.twitter.com/BEOR0L0gqr

“It’s poor decision-making. As soon as it leaves Shane’s foot you’re thinking, he’s (Leno) in trouble here.” said Roy Keane after the game as quoted by the Metro.

“He’s having a good chat about it afterwards but he shouldn’t, he should be straight down that tunnel and hanging his head.”

Aubameyang blunt, Iwobi wasteful and Ozil made no impact