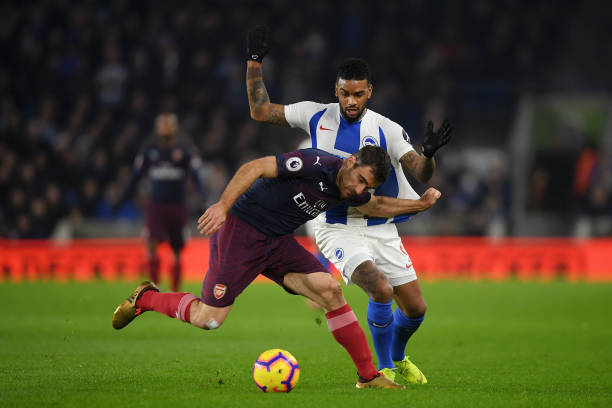 Arsenal has today made a 1-1 draw with Brighton & Hove Albion and it was a very disappointing performance from the North Londoners who were totally outclassed in the second half of the game. Aubameyang scored Arsenal’s first goal in the sixth minute and Locadia equalised for the home side in the 35th minute.

Arsenal was very disappointing in this game because it looked very stranded in the first half and made countless back passes, and it was only Matteo Guendouzi who was trying to open up the game with his beautiful passes. In fact, he was the one that started the move for Arsenal’s goal because he tried sending a long ball to Lacazette who then fought to get the ball to himself until he decided to give it to Aubameyang who scored a great goal.

One would have thought that this early goal would have given the gunners the momentum to look for another goal but they rather sat back and started playing defensively, making back passes which almost cost the gunners. Arsenal got a corner and most of their centre backs went in to look for a goal, then Brighton broke out on a counter attack, the ball was sent into Arsenal’s half and Stephan Lichtsteiner tried to head it away but failed and the gunners conceced.

Brighton & Hove Albion going on the score sheet gave them confidence and they now had full control of the game. The first half ended 1-1 and Unai Emery made just one substitute at the start of the second half, he took out Ozil to bring in Alex Iwobi.

The second half was very disappointing because the gunners didn’t even get shots on targets. Unai Emery tried bringing in Aaron Ramsey but the Wales international made no impact, Maitland-Niles also replaced Laurent Koscielny who was seen not feeling comfortable ( injured). So the gunners shared the points and it’s all because of Unai Emery’s bad decisions.

Arsenal 3-1 Burnley: How it happened