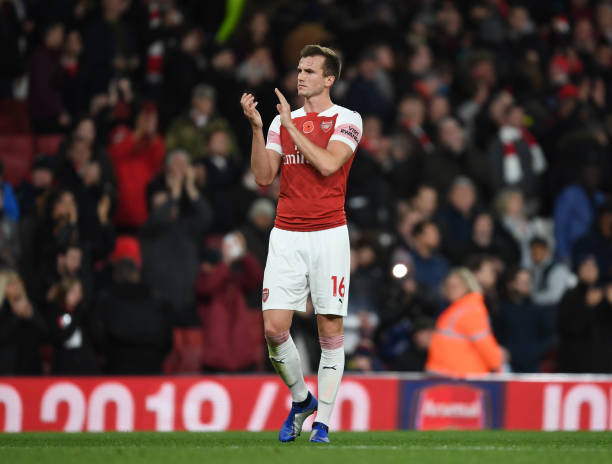 Arsenal defender Rob Holding got injured in Arsenal’s match against Manchester United on Wednesday at the Old Trafford. Rob Holding has been impressive for the gunners this season and it looks like he was comfortable at playing in the 3-4-3 formation which Unai Emery has started using in the last few weeks.

Arsenal fans have waited a long time for an update on the injury of Holding and the club has finally released an official statement on how long the English international will be out.

“Rob will undergo surgery to repair this in the coming days. The rehabilitation process is expected to take between six to nine months.” the statement read.

It’s frustrating news for Arsenal, Unai Emery and the fans because ever since Rob Holding joined the first eleven of the gunners, he has been outstanding on the pitch and has helped the gunners maintain their unbeaten run.

So Rob Holding will be out for up to nine months but he has in the last few days been receiving messages of encouragements from the Arsenal fans and everyone associated to the North London team. He has also took the opportunity to thank everyone for their support via his social media account.

Just want to say a big thank you to all the fans, players and staff members for the support during the past couple of days. Gutted to get injured during a strong period for the team! pic.twitter.com/EC466il7aG

“Just want to say a big thank you to all the fans, players and staff members for the support during the past couple of days. Gutted to get injured during a strong period for the team!”

Revealed: How Mesut Ozil is the reason why he gets injured